Photo by Jonathan Velasquez on Unsplash

May 31, 2022 — The first year of the COVID pandemic caused a significant drop in news profitability, but those numbers are starting to climb again, according to the latest RTDNA/Newhouse School at Syracuse University Survey. After a nearly 10-point drop in the year of COVID, profitability went up 4 points and loss fell by more than 3.

Profitability in 1996 hit 72%, the highest level ever recorded in 28 years of doing the Survey. Missing percentages are non-commercial stations. If you recalculate to eliminate the effect of non-profit newsrooms, the profitability percentage moves up a point to 56.4%. Among news directors who know whether the news department makes a profit (eliminating the “don’t know” group), 80.2% report the newsroom makes a profit. 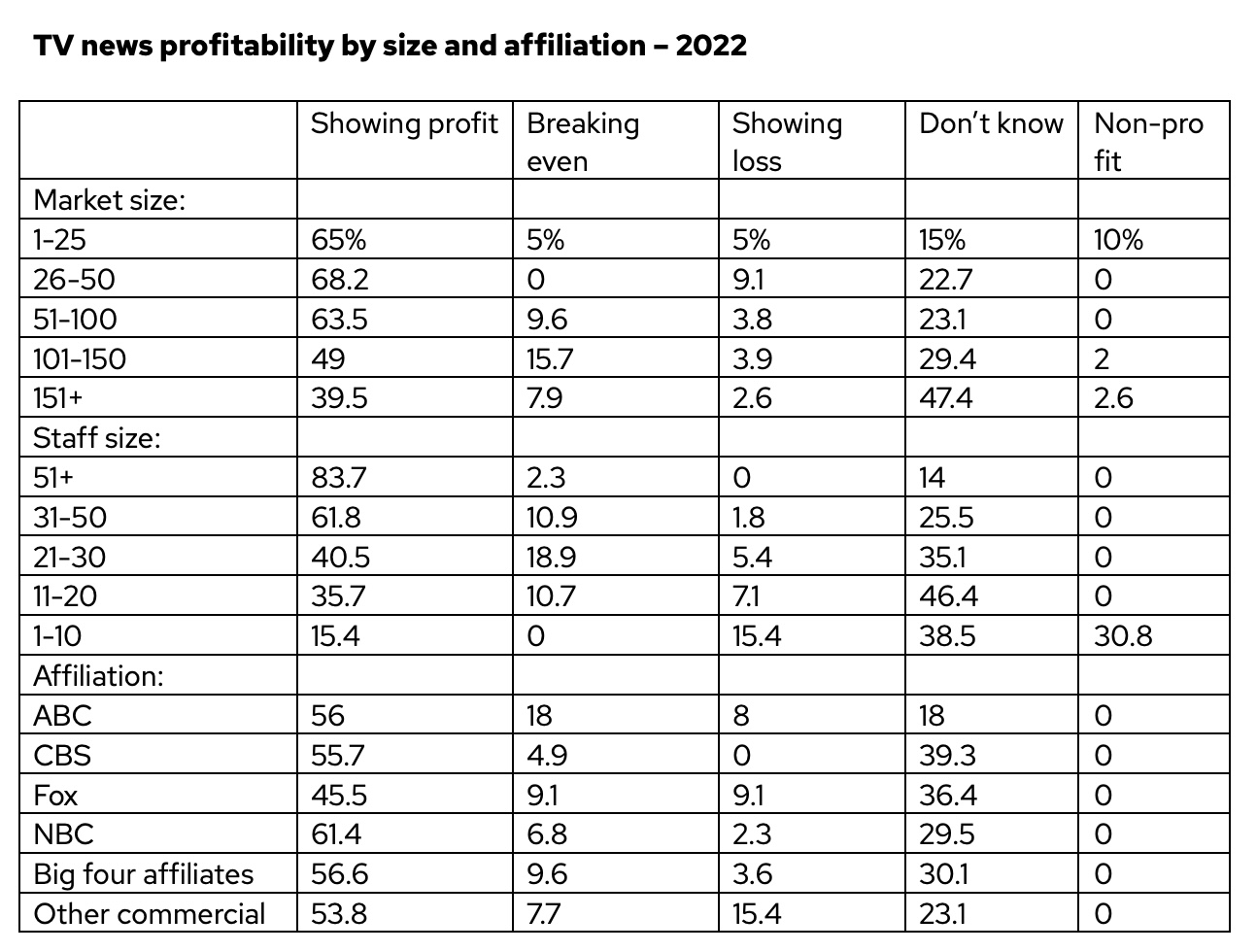 Virtually every category went up in profitability. There were few exceptions. And most — but not all — categories went down in the loss column. Breaking even varied more. 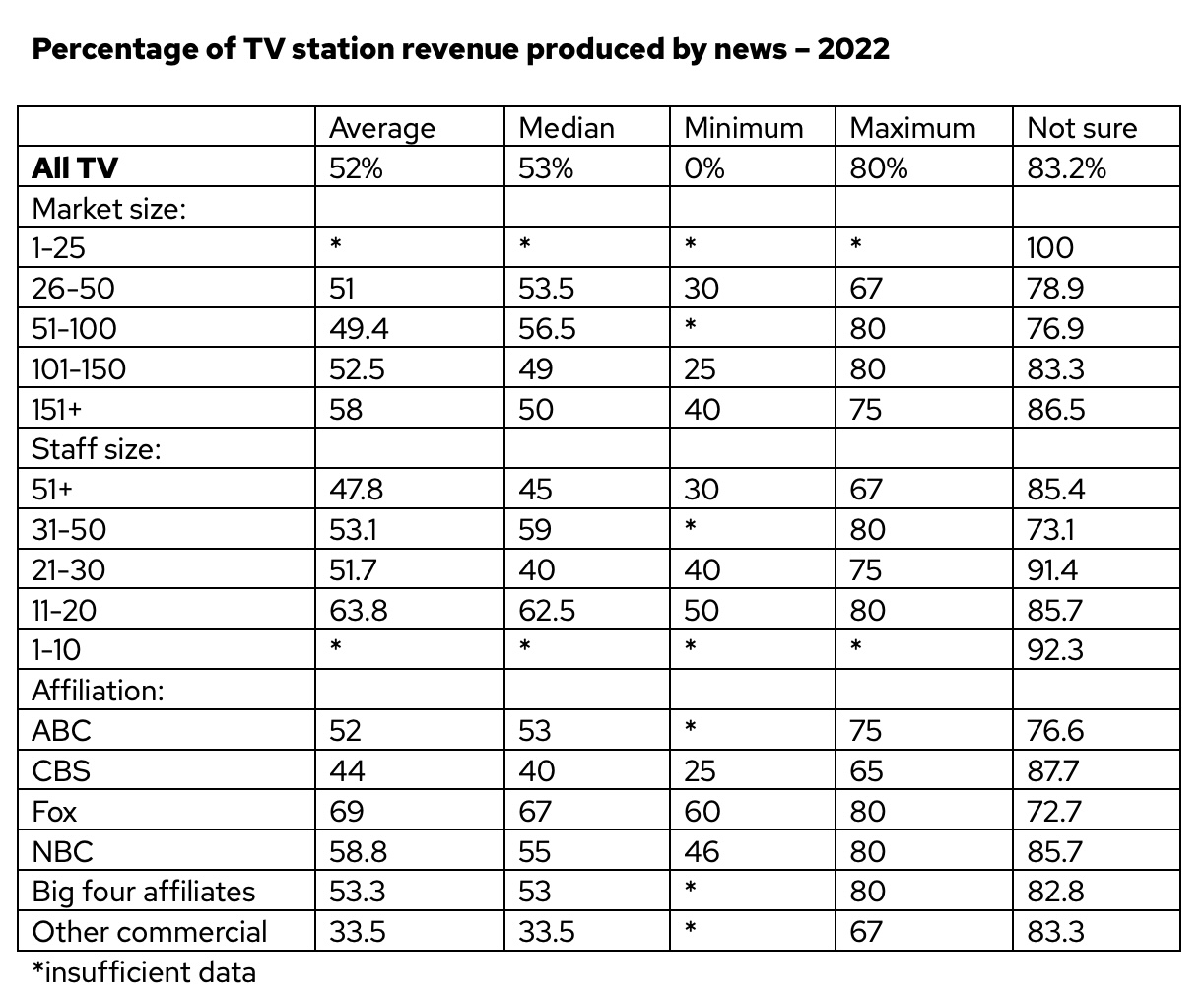 Both average and median profitability rose this past year. The average went up by 4+ points and the median rose by 3. But a high percentage of news directors say they don't know the answer to this question, and the “don’t know” group was unusually high this year. Consequently, the overall numbers likely are more reliable than in the many sub-groups.

Website profitability rose by nearly 6 points, but not everyone shared in that increase.

All gains came in markets 26 to 150. The biggest and smallest markets largely held steady. As usual, the bigger the newsroom staff, the more profitable the website … from 0 profitability for newsrooms with fewer than 11 staffers up to 57.8% profitability for stations 51+ news staffers. 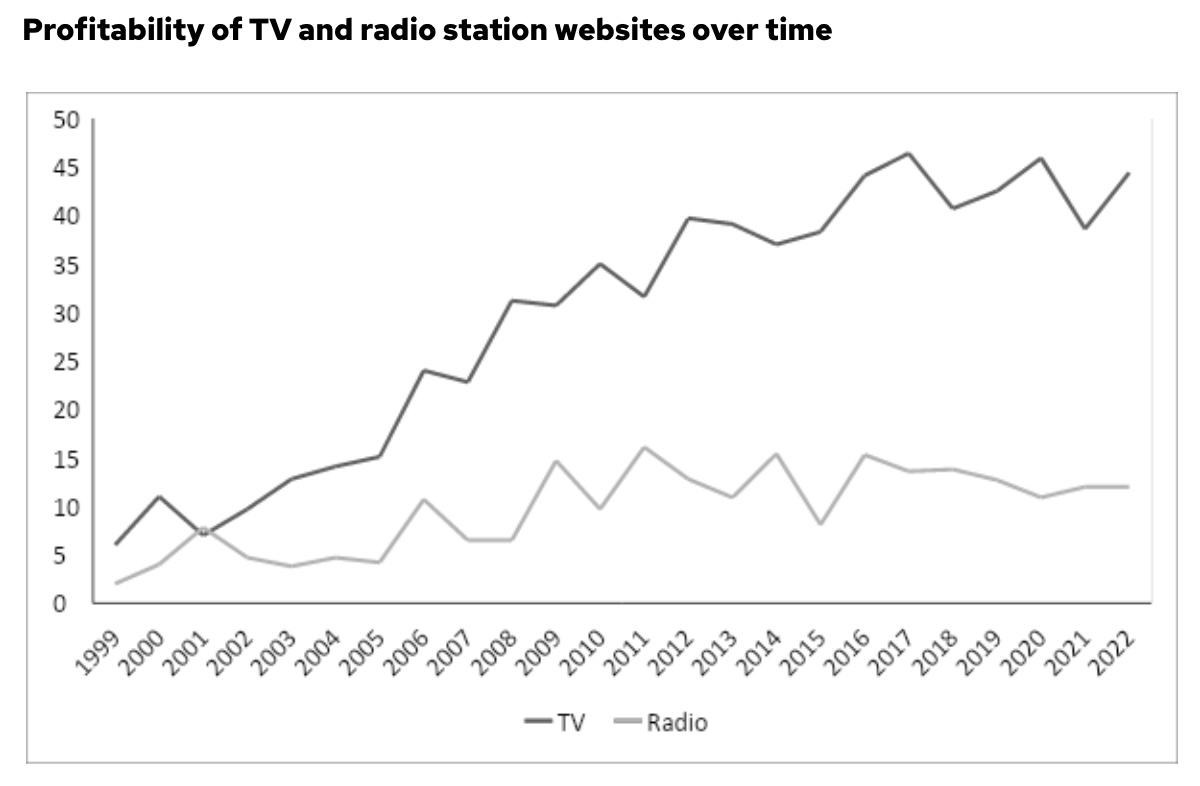 A huge difference in news budgets between 2021 and 2020. The percentage of budgets that increased this past year nearly doubled, and the percentage that went down plunged by more than 50%. Of course, “same” won — as it almost always does.

After four years of decline, there’s been a turnaround in stations providing news to other outlets. It was just over a decade ago when the RTDNA/Newhouse School at Syracuse University Survey showed a sharp growth in the outside reach of local TV newsrooms as more and more stations ran their news on other TV stations, radio stations, cable channels and more. That growth turned into stabilization a few years ago, then into decline. The percentage of stations involved with other media had fallen from 76.6% five years ago to 68.3% four years ago to 60.5% three and two years ago and last year it dropped to 59.7%. The peak came in 2011 at 78.4%. But this year, the percentage is back up with 64.4% of stations supplying news to other outlets.

While there are usually some patterns to what’s taking place, that really isn’t the case this year. The very smallest markets and very smallest newsrooms are less likely than others to supply news to other outlets, but otherwise, there are no patterns by market size, staff size, network affiliation or geography.

There are now 707 local TV newsrooms that run news on those and another 413 stations. The 707 total is down three from a year ago. The latter number is up 7 — following last year’s increase of 7 and a jump of 30 the year before. That puts the combined number of stations running local news at another record total of 1,120. Even in the age of COVID, every year brings a new, record high.

TV news departments provide content to a variety of other outlets

Three of the five categories are up this year: local radio, a website not your own and a cable TV channel. Another local TV station and TV in another market are both down about a point.

Half of the “other” category noted other stations owned by the same company. Several noted a local newspaper, and there wasn’t much left after that.

Note that in the above table, the percentages will add to more than 100% because some stations are involved with more than one other medium.

Radio news profitability starts to rebound, but growth is slow

There was no discernible pattern to profitability based on staff size (profitability peaked at 3 staffers), number of stations in the local cluster (groups of 3 or more stations and AM/FM combos came out on top), or market size (medium and large markets edged out small markets with major markets well behind … but that’s where most of the non-profit stations are). Stations in the Northeast were less likely to be profitable and more likely to report losses than any other region.

A quarter (24.2%) of radio news directors and general managers reported the percentage of station revenue produced by news. That’s low enough to view the numbers cautiously, but it’s high enough to report. The managers reported, on average, 10% of station revenue came from news. But the median — or typical — percentage was just 5%. The average is down from last year’s 13.4%, but the median is identical to the last four years.

The numbers on radio website profitability in the latest RTDNA/Newhouse School at Syracuse University Survey look a lot like last year. Profitability edged down 0.2, break even rose by 3 and loss fell by less than a point. Large markets and small markets rose in web profitability, with the biggest gains in small markets.

For whatever reason, stations in the West were a lot less likely to have shown a profit on the web. The West lagged last year, too. Missing percentages represent non-profit stations. 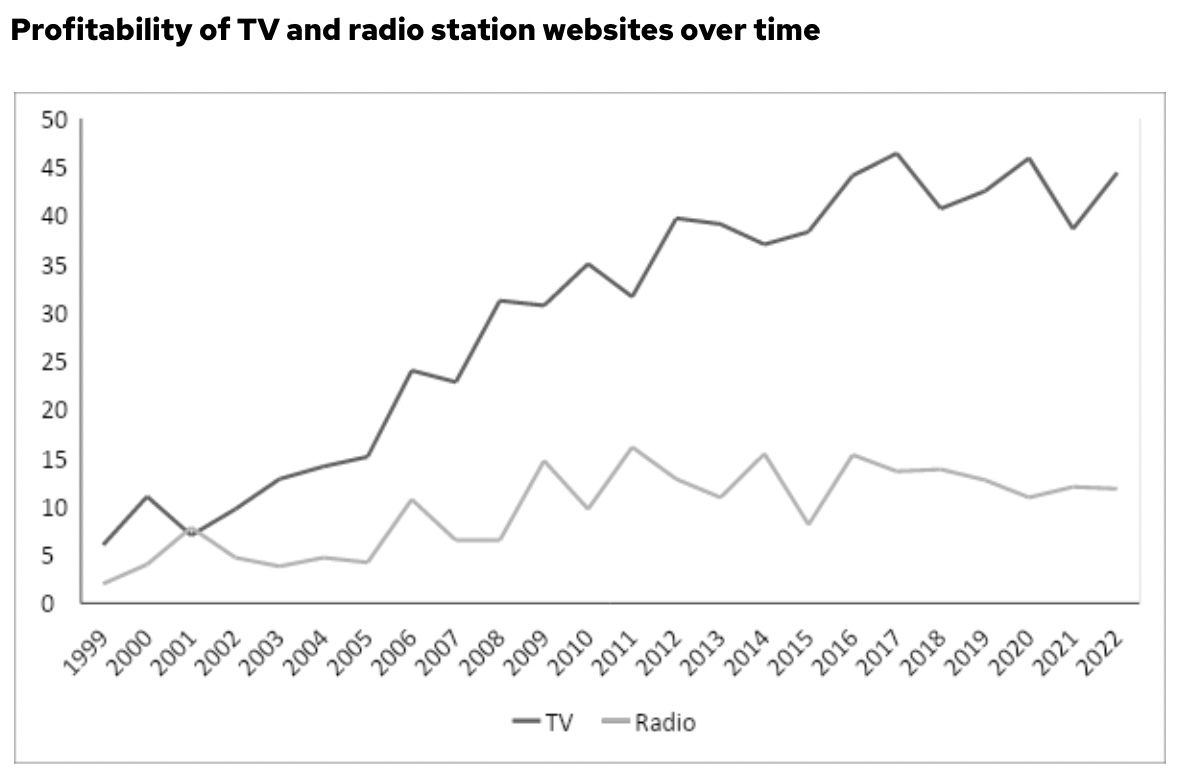 The general upward trajectory in TV is pretty clear; so is radio's up and down ride.

The big winner in radio news budgets — as usual — is “same,” with nearly two-thirds of the stations reporting no change in budget. The percentage reporting a budget increase rose by 4 points versus last year, while the percentage reporting a cut fell by 9. All in all, that’s not a bad year. No real patterns based on staff size, number of stations or market size. Stations in the West did the best; stations in the Northeast fared the worst.

The survey found that the percentage of radio stations getting news from an outside service largely held steady from a year ago, falling from 22.5% to 22.2%.

Generally, the smaller the staff, the more likely that the station gets its news from an outside service. No surprise there. Number of stations in a group made no difference one way or the other. Market size was again inconsistent, although small markets remained less likely to use an outside service than any other market size. Geography made a difference, with stations in the South and Midwest less likely than others to use an outside contractor.

For those who said local radio news came from an outside service, we asked for the name:

The survey found 20.1% of radio news directors and general managers plan technology purchases this year. That’s up a point and a half from last year. Still low, but better than two years ago. Non-commercial stations were twice as likely as commercial stations to be making a purchase. Every other variable was inconsistent.

Planned purchases were more spread out than usual this year. Leading the list, at 31%, studio equipment. New automation equipment was at the top of that list, just ahead of new audio boards, then audio software and on-air and production studios.

Remote equipment, which came out on top last year, came in second at 24%. That was evenly spread out among remote equipment, mics, recorders, headsets and digital cameras.

Just behind that, at 22%, came newsroom purchases — primarily new computers and new newsrooms.

Streaming purchases came in at 13%, followed by new transmitting equipment at 9%.