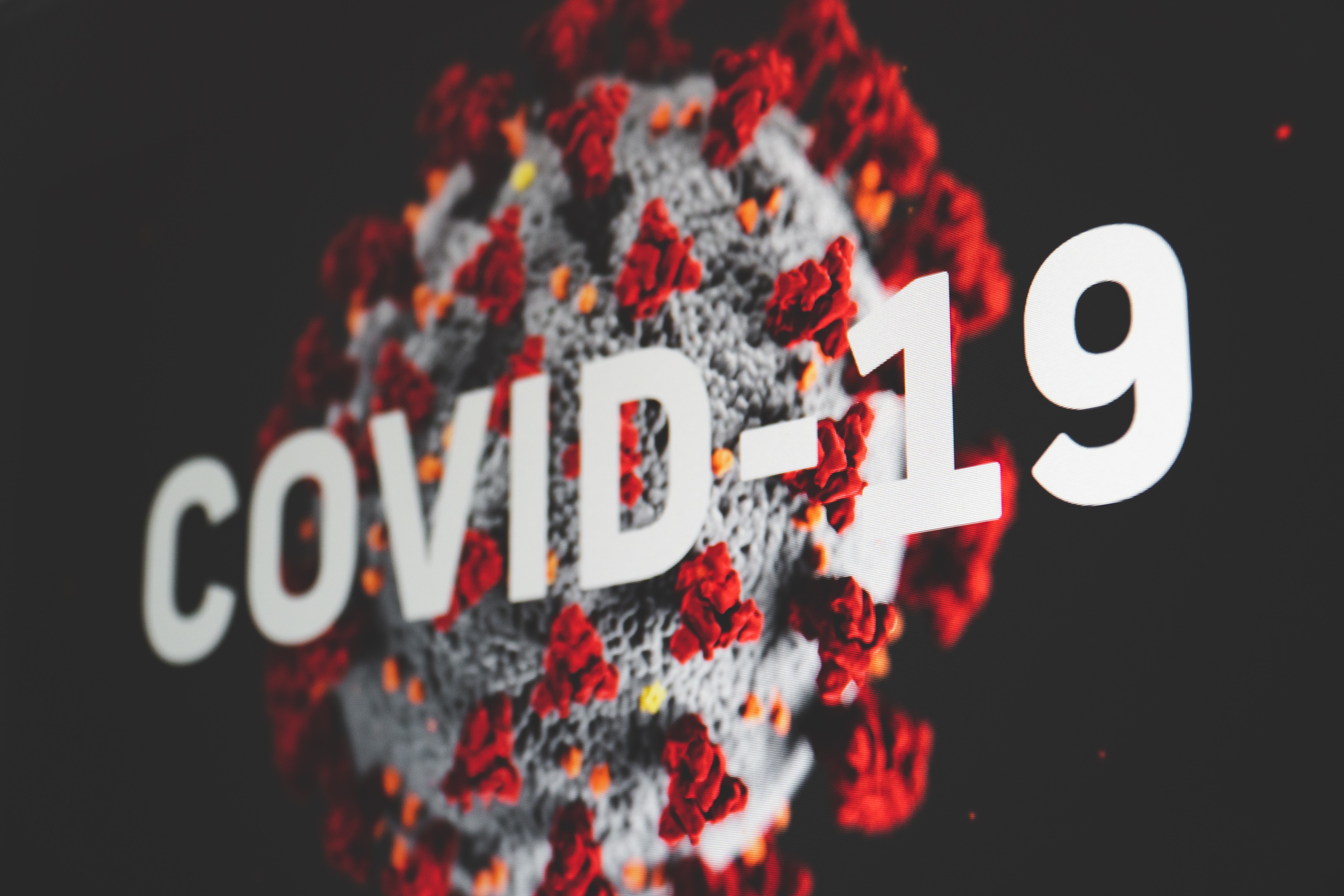 What did local news departments do in 2020 that was new or different? In the words of one radio newsroom manager: “survived a pandemic and worldwide social unrest.” 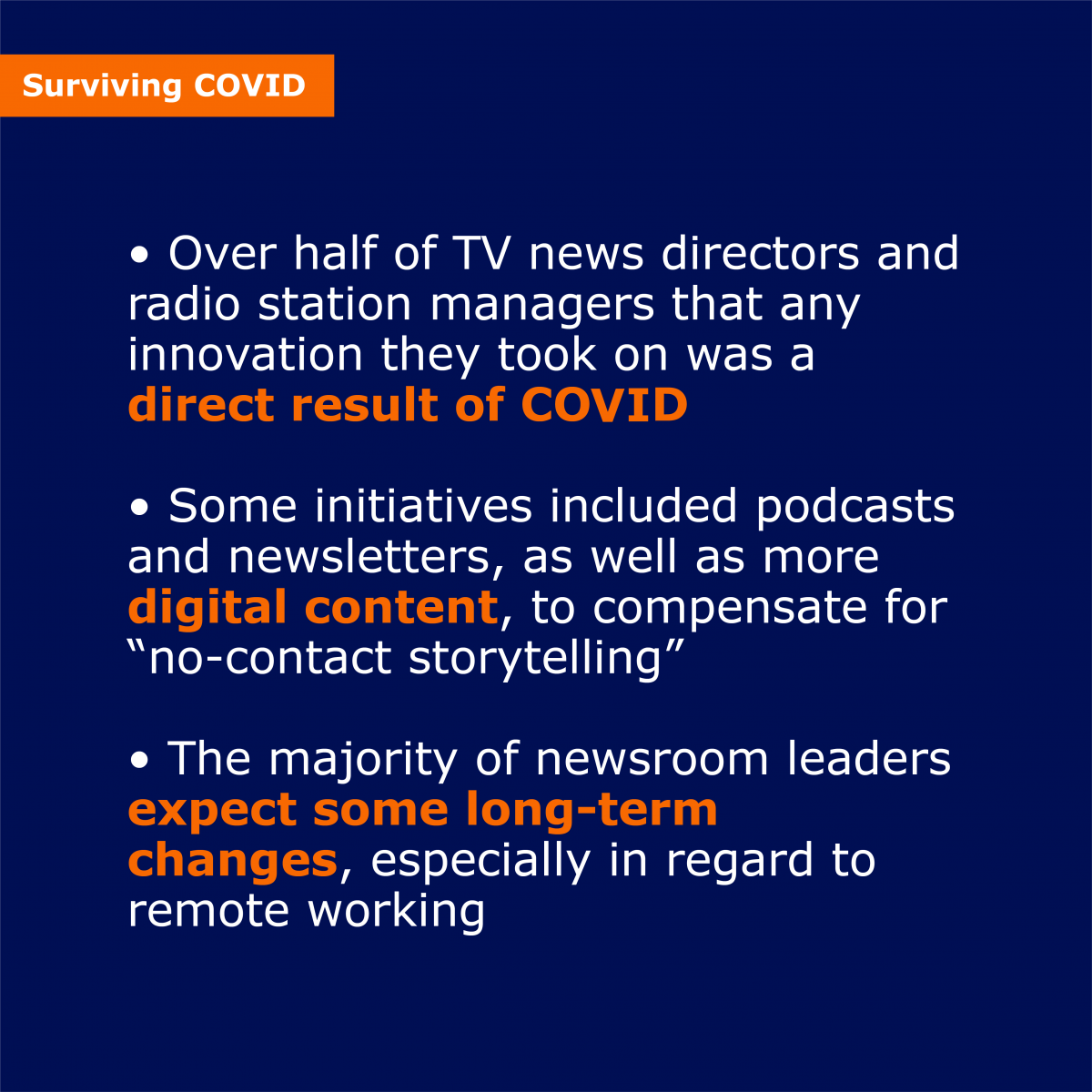 Close to half of local TV news directors and half of radio managers report any innovation their station took on during 2020 was to cope with COVID. Local news managers cited the “enormous logistical challenge” of moving workflows remote and cloud based. “No-contact storytelling” posed another challenge.

Most local news managers reported these innovations were merely for survival and were relatively successful in keeping newscasts airing and station staff healthy, if not sustainable sacrifices in compromised production quality.

A quarter of TV newsrooms and a quarter to a third of radio newsrooms report other, more strategic initiatives. Some also driven by COVID, more local newsrooms report producing virtual town halls, specials and longer-form or digital-exclusive content. Among radio newsrooms, podcasts, newsletters or just more local coverage were most reported new initiatives. Public radio stations were twice as likely to report doing something new during 2020, as were stations in larger markets and with bigger staffs. 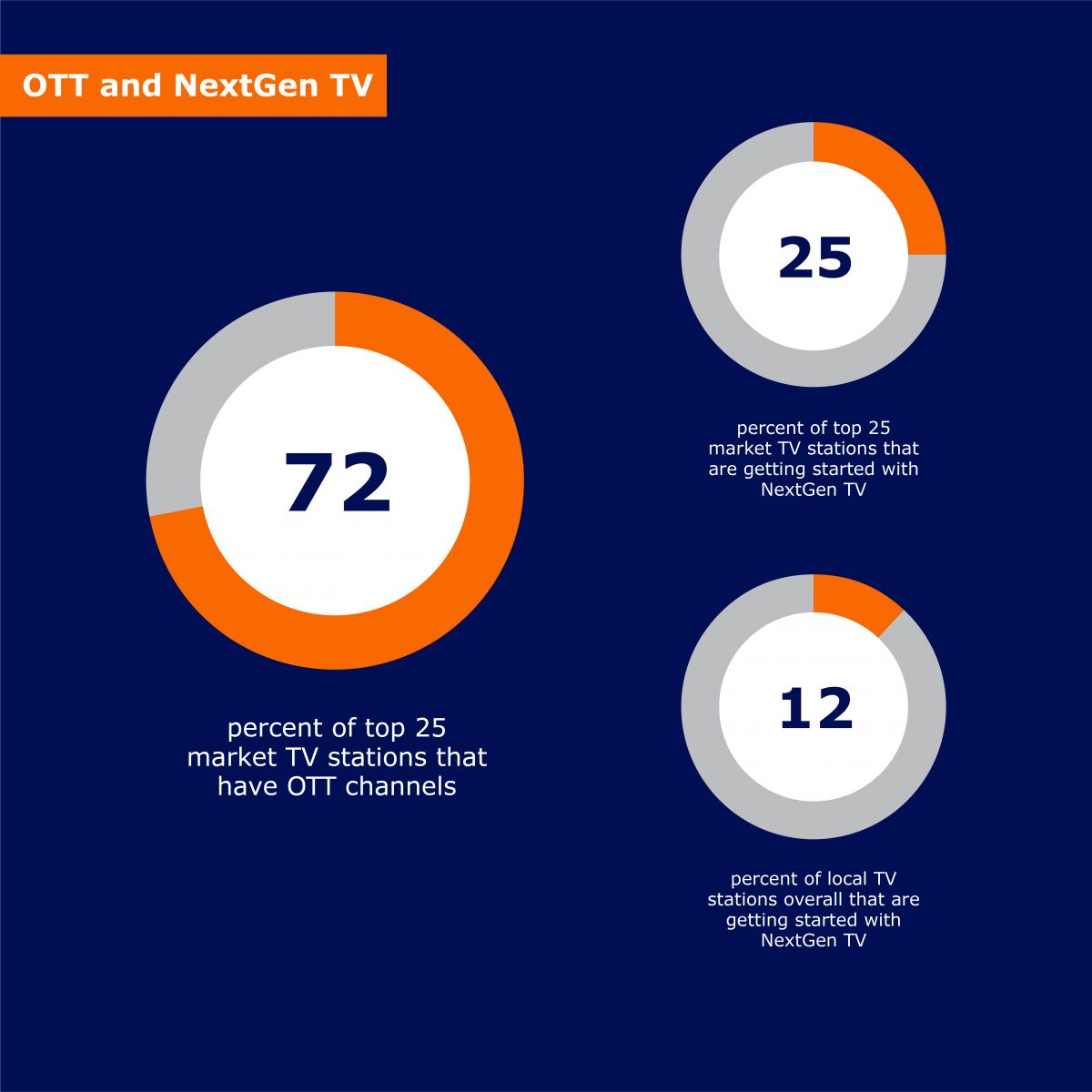 In the survey’s second year asking TV news directors about OTT, more than half report they are producing over-the-top streaming content, up only slightly. Stations in the top 25 markets are most likely, at 72%, to report having OTT channels. Commonly reported types of OTT content include 24-hour-a-day streams, OTT-exclusive shows and some live content. Many stations with OTT content report establishing OTT/streaming desks has yielded good results, though some reported low demand for OTT content by their local audiences. Close to 60% of OTT user stations say it’s too early to determine how OTT will benefit their newsrooms, but almost as many report reaching new audiences is the biggest benefit of OTT so far. Another third say it offers opportunities to produce more in-depth content. 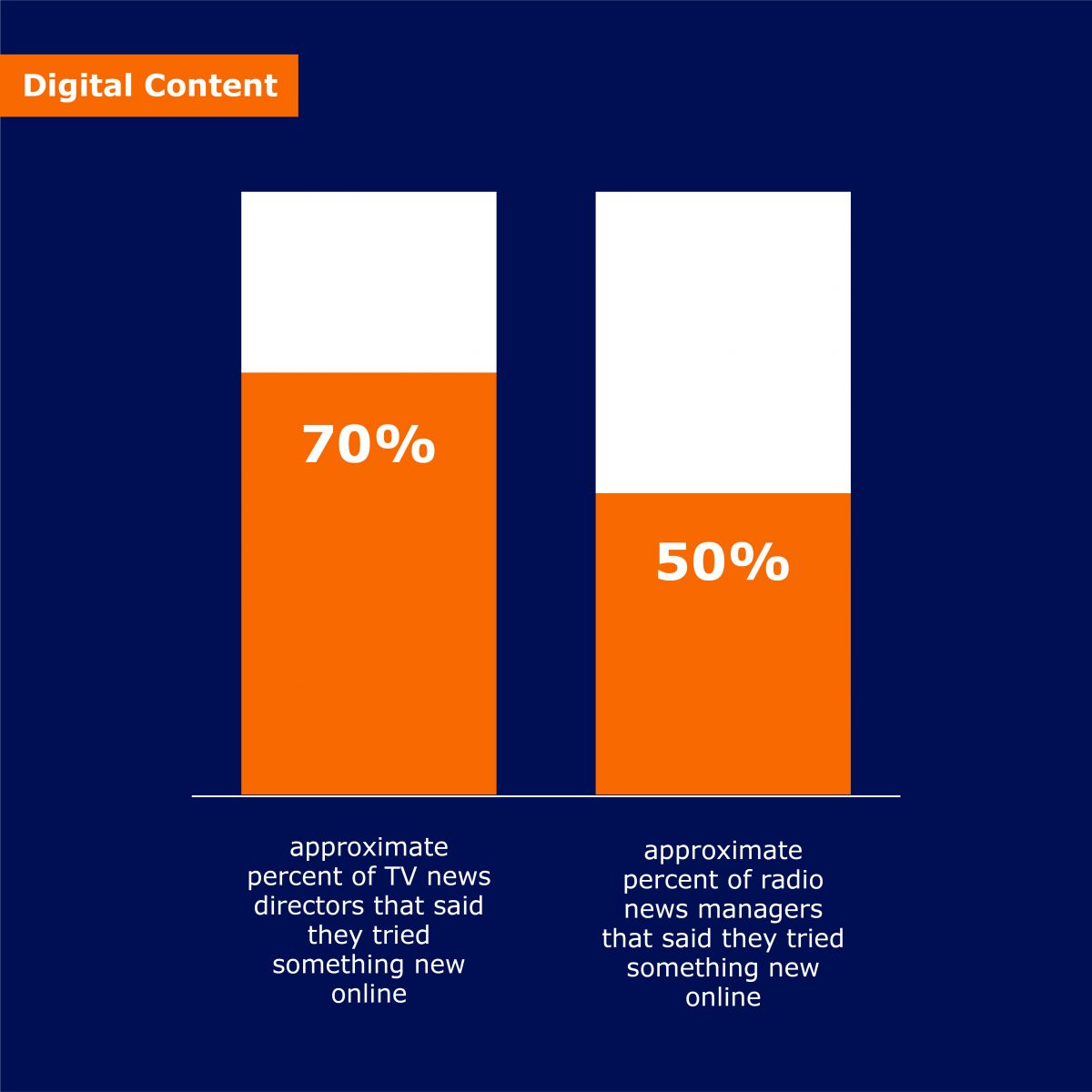 Just under 70% of local TV news directors – down noticeably – say they tried something new online during 2020, as did just over half of radio news managers – a slight increase.

However, most stations didn’t significantly increase the amount of content they produce that was web-only, and digital exclusive content reflects about a quarter of what local TV stations produce. 41% of news directors didn’t know their station’s web traffic numbers for 2020, an increase from 2019 when just under one third didn’t. New directors who did know their traffic numbers primarily reported substantial gains in web views. 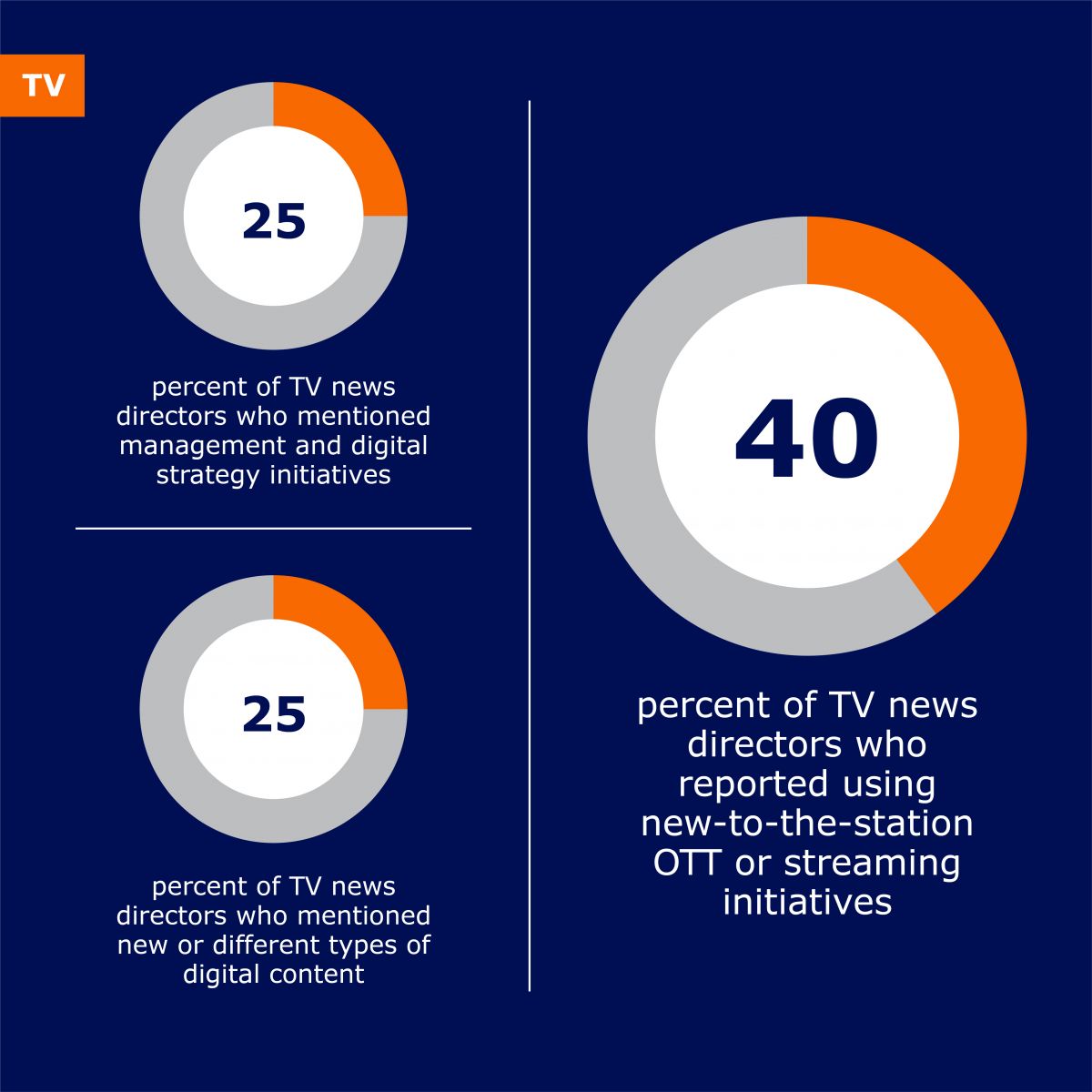 Local TV news departments didn’t produce many more podcasts or launch new apps in 2020, either. The typical station, measured by median, has no podcasts and the average per station is less than one half. Stations that have a podcast, in other words, are in the minority. On the other hand, 96% of TV newsrooms have at least one app, with the median and average number of apps per station, up marginally, at around two.

Of more than 200 responses from radio news managers who say they undertook new digital initiatives in 2020, almost 80% say they focused on more, better and new types of digital content. A quarter specifically mentioned COVID coverage online. Radio managers report slightly more digital-only content, with just over 17% of web content, on average, as web-exclusive.  Not all radio stations that air news post news online, though. While almost 98% say they have a website, just over 80% have news sections on those sites. Among those that do – and could report their web numbers – traffic was up in 2020, especially in large and major markets. 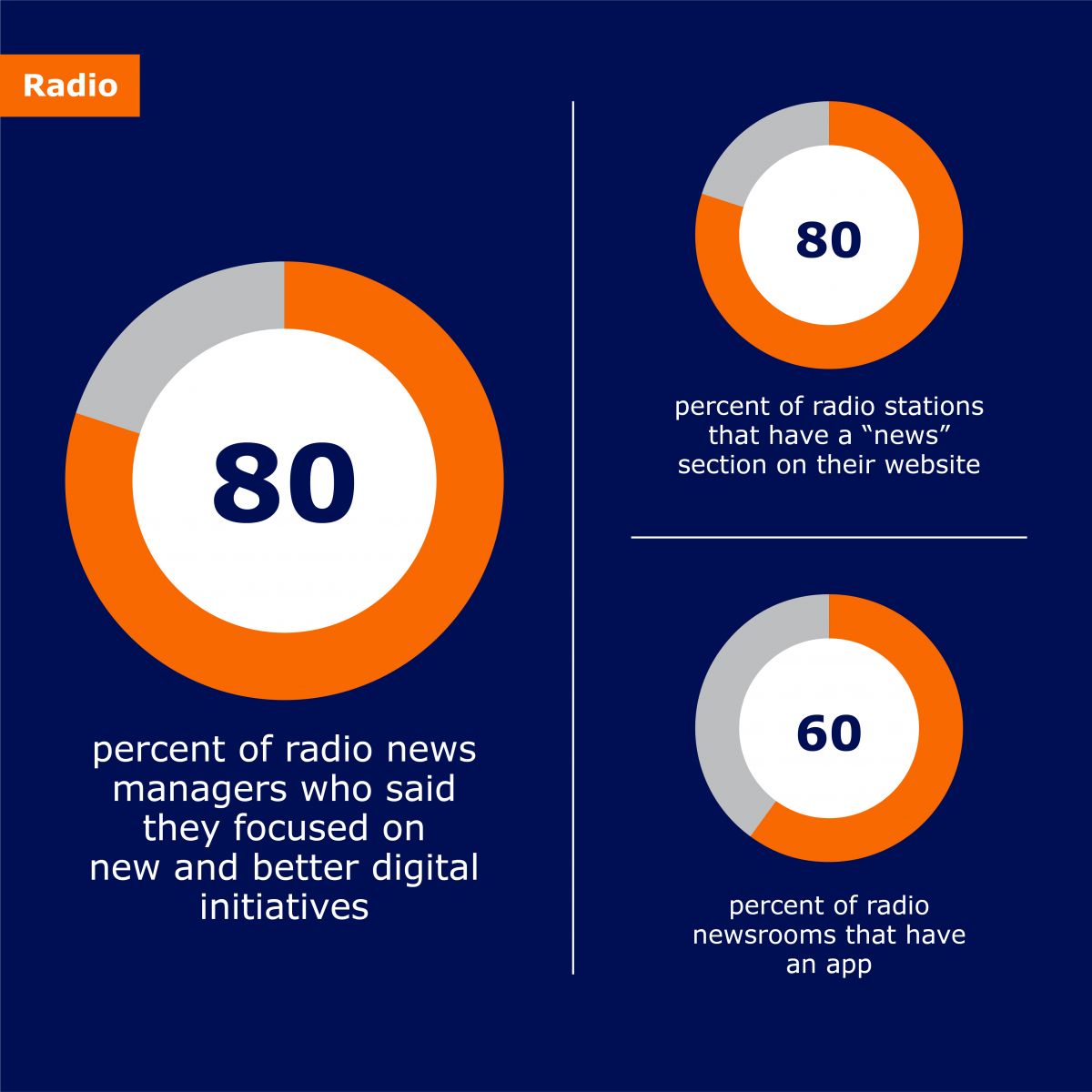 Like in TV, podcasting is growing slowly, with the typical radio news department reporting zero podcasts. The average of three, up slightly, indicates that radio stations with podcasts are among the minority, but the few stations with one or more podcasts pull up the average.

According to the Pew Research Center’s Social Media Use in 2021 report, YouTube is the social media site with the most reach among American adults, reaching some 80%, and is also one of the few platforms with growing use. Facebook is the second most widely used platform at just under 70% of adults overall, with high levels of use across adult age groups. Instagram ranked third, reaching some 40% of adults, with Twitter and other platforms like Snapchat and TikTok used by a quarter of adults or fewer. Adults under 30, the report finds, are similarly likely as older adults to use social media at all, but much more likely to use Instagram, Snapchat and TikTok. 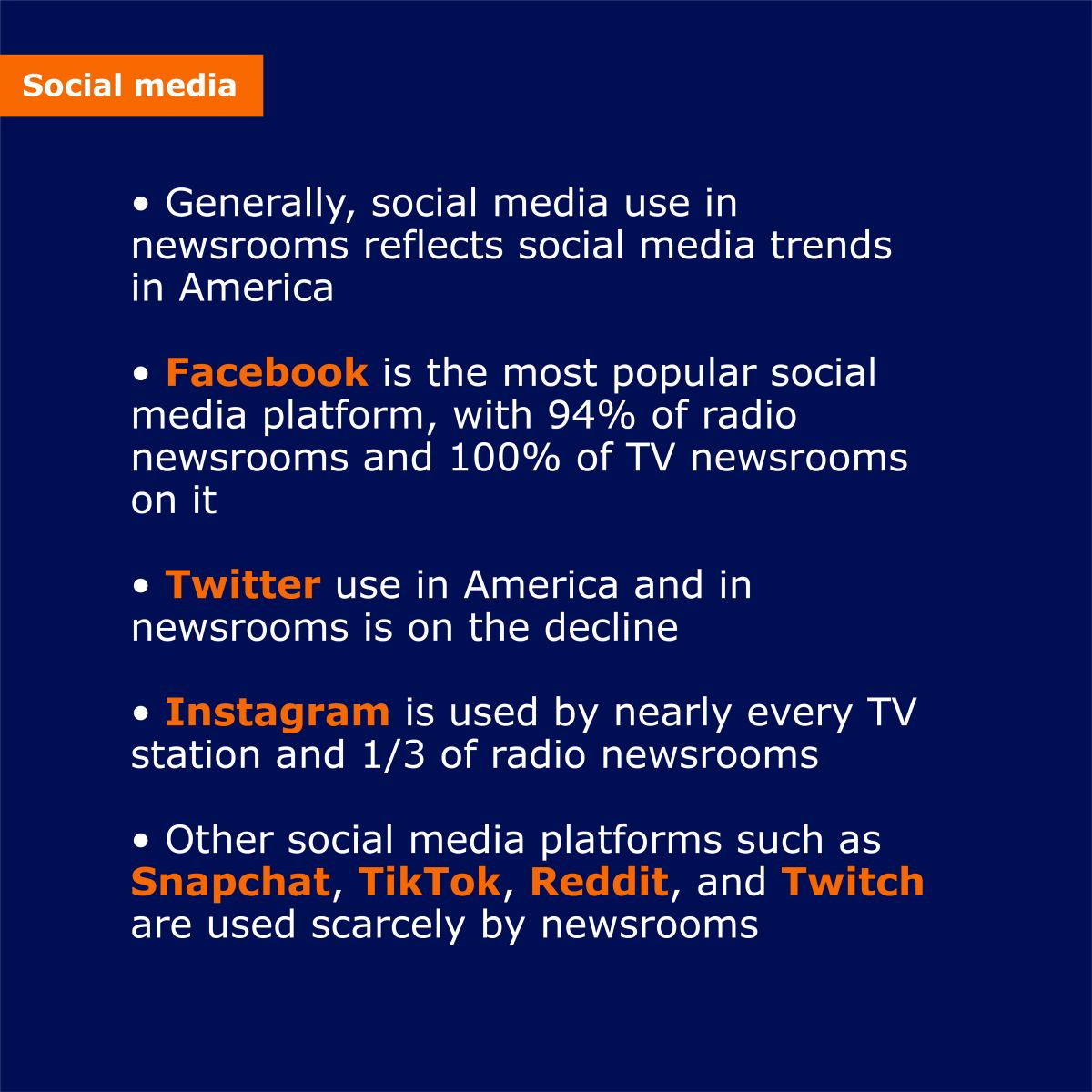 How similarly do local broadcast newsrooms’ social media use match their audience’s? Relatively closely, in that Facebook is the most universally used platform for local newsrooms, the RTDNA/Syracuse survey finds, and the primary focus of many newsroom social media strategies. A few radio newsrooms left Facebook during 2020, but 94% still use it, and no TV newsroom in the last six years of the survey has said it doesn’t use Facebook.

Mirroring Americans’ use trends, Twitter use among local news has been declining for several years, with most TV newsrooms using the platform, but less frequently. Close to 40% of radio newsrooms don’t use Twitter. 60% of radio stations overall report they only use Facebook and/or Twitter, but there’s a significant public-commercial gap. 61% of public radio newsrooms say they use more or other social platforms while 71% of commercial stations do not.

Instagram use is now almost universal among TV newsrooms and is used by about a third of radio newsrooms. Other social media platforms, like YouTube, Twitch, Reddit, SnapChat and TikTok, earned only a handful off mentions by radio or TV stations. Local newsrooms’ social media strategies, in other words, have matured from experimental to strategic. “That wide range of options has narrowed dramatically,” researcher Bob Papper says, adding, “at the same time the focus and purpose of social media has been steadily shifting from an end in itself to a means to an end: moving people to the station website where making money is possible.”

Slightly more local news managers – 60% of TV news directors and 37% of radio managers – did report trying something new on social media during 2020. Among radio managers, strategy efforts led social media initiatives in 2019, while in 2020 46% report content-related social media efforts and 30% focused on strategy. Among TV managers, 48% focused on strategic moves including using Instagram more, better social media monitoring and more two-way engagement efforts. 34% report changing up social streaming including, for some stations, more Facebook live videos, but, for many, less Facebook streaming. And 17% of TV managers say their social media efforts in 2020 focused on new or different content, particularly locally-focused.