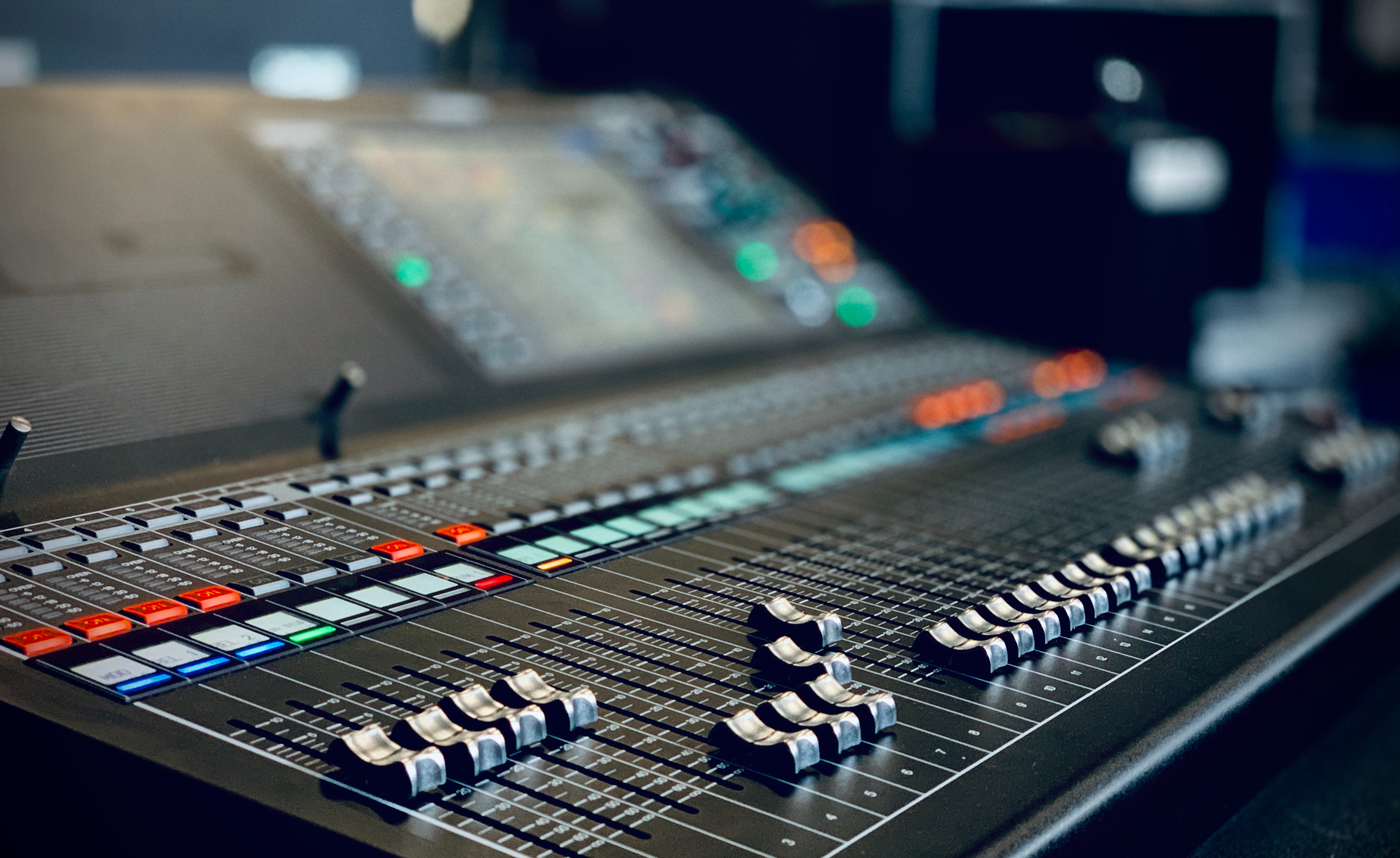 Contrary to all expectations, local TV news ended 2020 with record high employment – until cuts in March 2021 erased those gains. 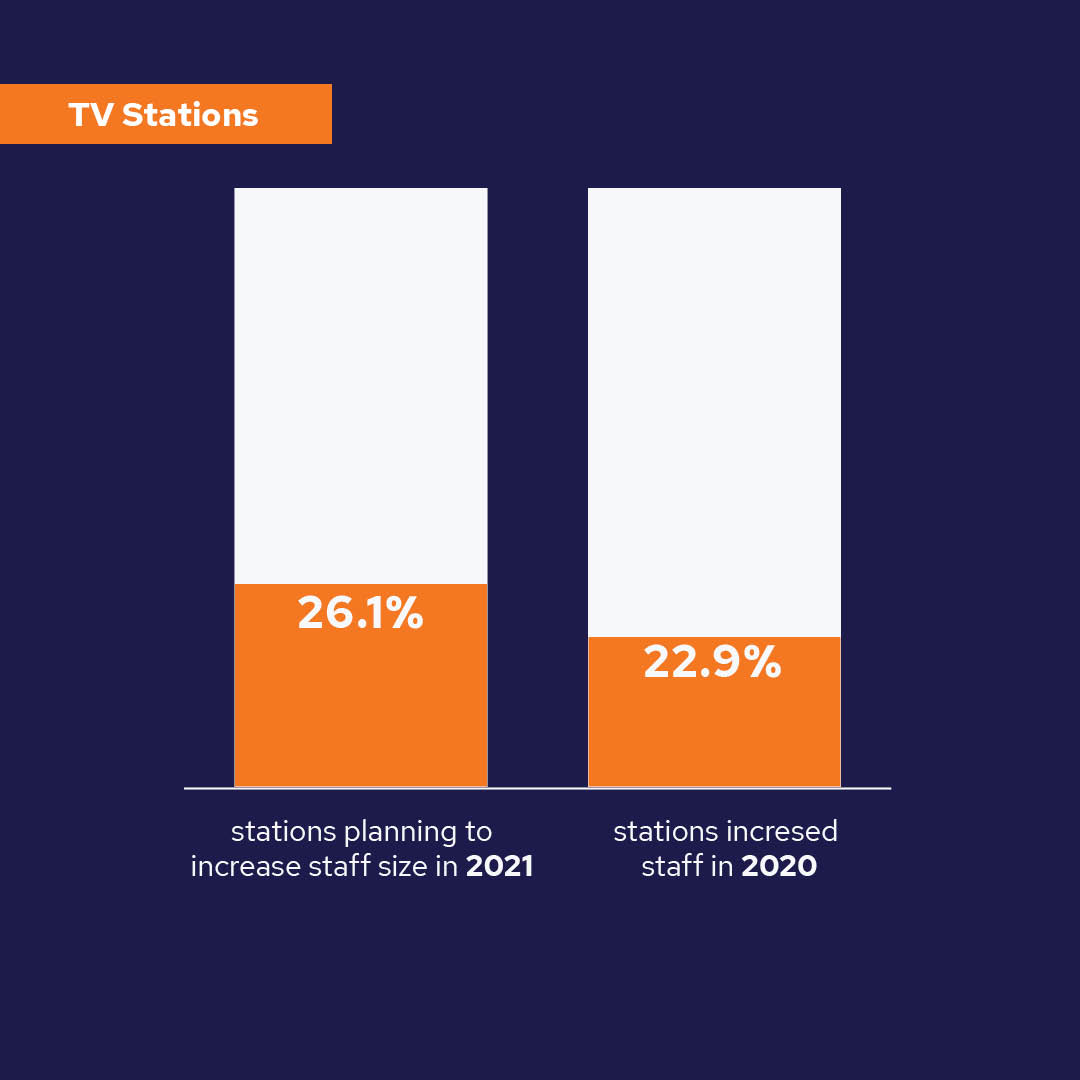 More stations lost staff than added, with a record 30.2% of stations seeing staffing cuts during 2020. But 22.9% of newsrooms grew, and the increase in the number of local TV newsrooms brought the job total up. Overall, staffing averages were up across most market sizes, regions and network affiliations, with affiliates of the big four networks most likely to gain staff. Stations in bigger markets, non-network affiliates and stations in the Northeast were most likely to see cuts.

More newsrooms report using solo journalists (sometimes called MMJs or MSJs) at least some of the time, but fewer mostly or only rely on solo crews, and the average newsroom has fewer MMJs than last year. The smallest markets overwhelmingly rely on MMJs, and mid-markets increasingly do, but fewer stations in the biggest markets report sending journalists out solo. 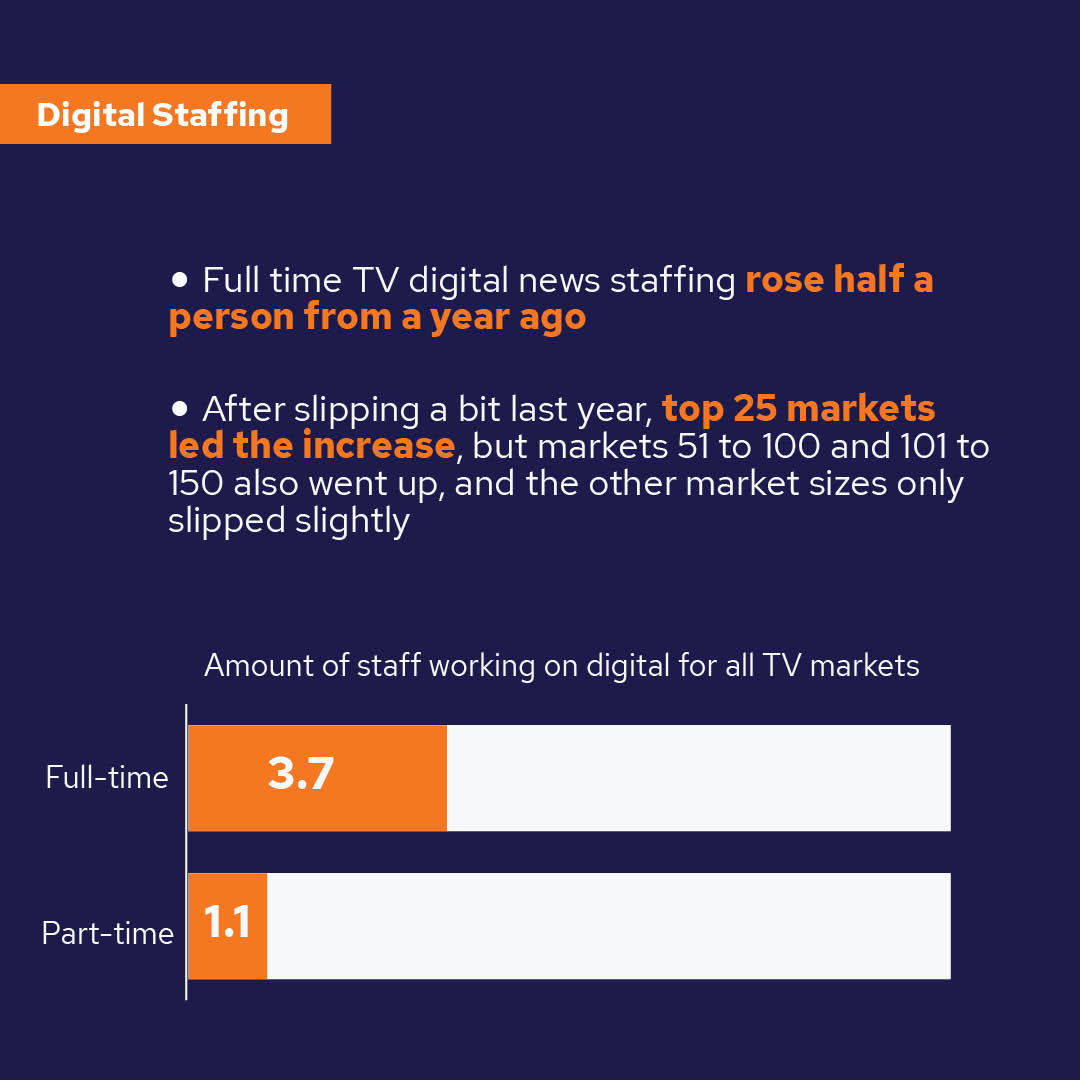 Some of this shift in major markets, particularly in 2020, may be due to increasing safety concerns.

In terms of hiring both to fill open jobs and for new positions, MMJs and producers remain most in demand. Almost a quarter of newly created news jobs were for MMJs in 2020, which along with digital roles and producers combined to represent about three-quarters of new hires.

While fewer news directors predicted staff increases during 2021 than in past years, slightly fewer predicted cuts, with more expecting no change or not sure. The 3.8% who predicted cuts were close, as more than 400 jobs have been lost in the early months of 2021. 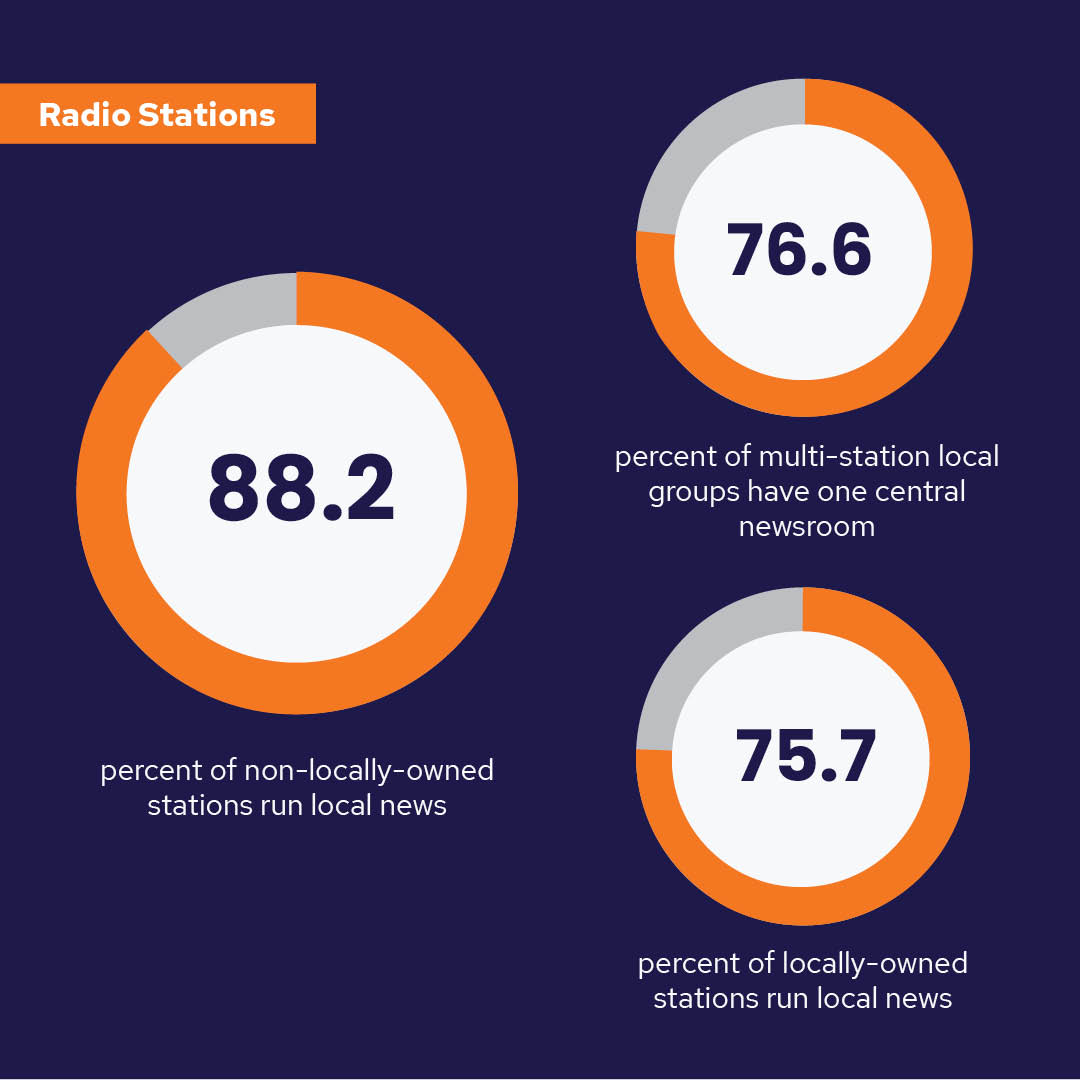 The median, or typical, local radio newsroom has included one full-time and one part-time employee as long as the annual survey has been conducted. The average, which reflects the influence of a smaller number of larger newsrooms, edged up from 3 to 3.2.

Three times as many commercial radio news departments cut staff as added. Public radio stations, on the other hand, were four times more likely than commercial stations to grow. The average number of staffers in a public newsroom edged up 1.1, while the commercial average grew just 0.3.

The slight growth in average public radio newsroom staff size brought the overall average up slightly. Public stations now average 6.7 full-time staff compared to 2 in a commercial newsroom, though public stations are more likely to be found in large or major markets and the median, or most typical, radio newsroom size overall is still just one. 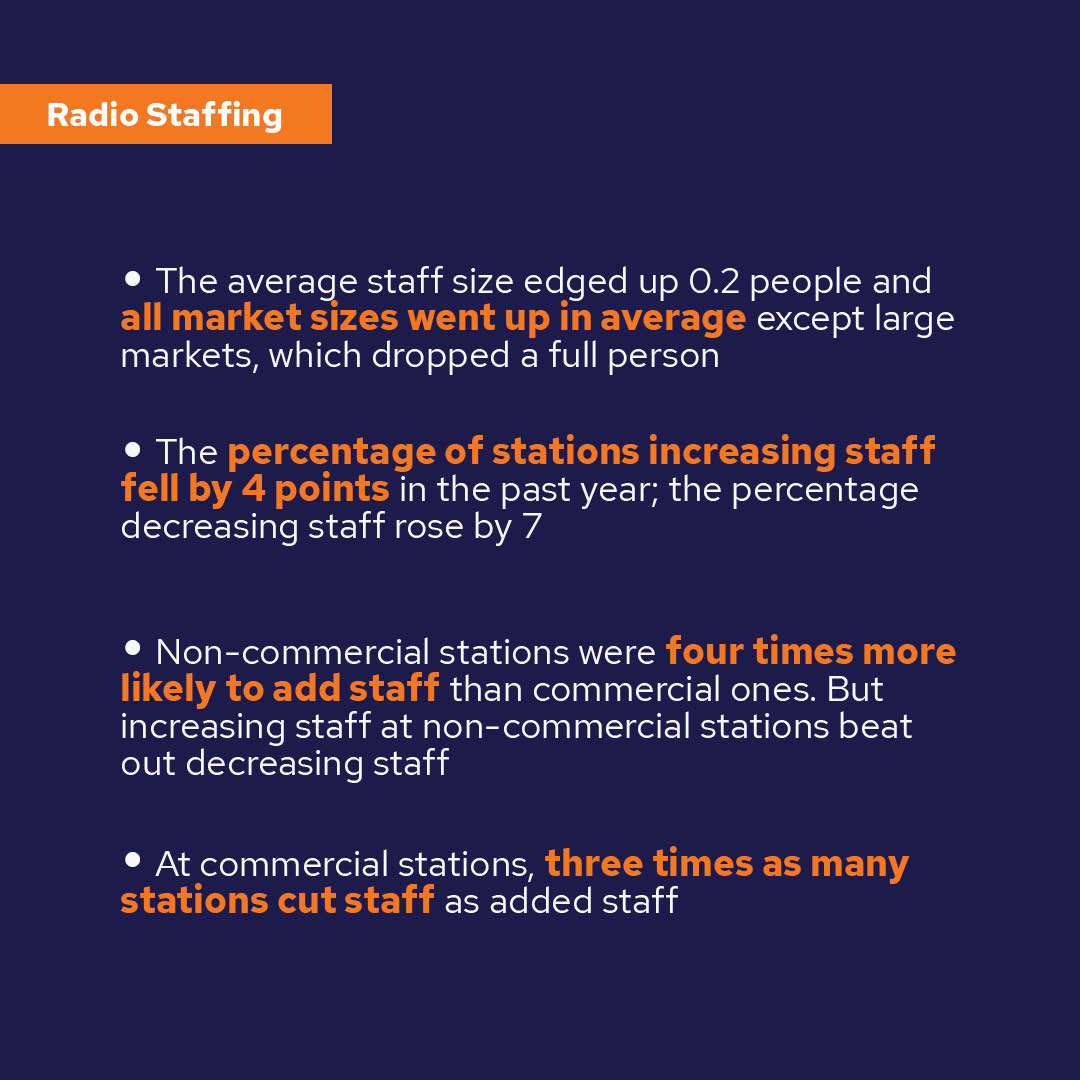 Full-time digital staffing decreased slightly on average overall, but digital roles were second most common role for new hires. However, radio stations in 2020 hired fewer people for open jobs or new roles on average than in 2019.