As Protests Continue, the Need for Contextual Journalism Grows 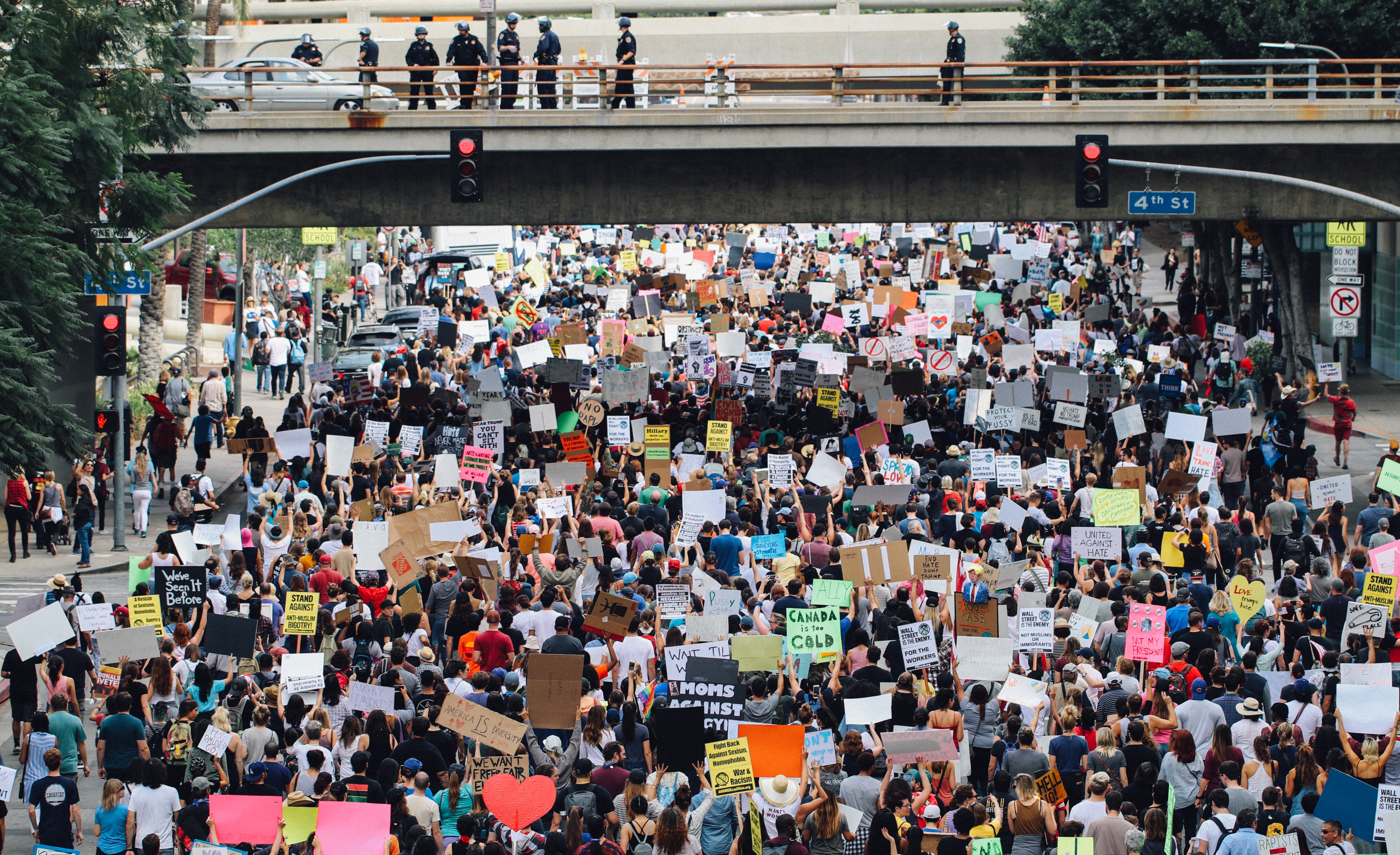 As the nation’s protests move into their second week, it would be natural for journalists on the local front lines to take a deep breath of relief. It's been an unimaginably tough 8 weeks and your reporting on the protests and on the ongoing coronavirus pandemic both inspired action and saved lives.

But it will get tougher, and it should. Maybe not physically, but intellectually. Now is the time for local journalists to do what they do best — provide context and understanding to what their community just witnessed.

Here are some ideas for taking this story to the next level. First, let’s look at who is involved in these stories and how their stories might be framed.

There have been three distinct and separate areas of coverage that journalists should approach as separate and distinct stories — Police and law enforcement, the protests themselves, and the violence perpetrated by criminals and rioters.

These start as breaking news events, of course. The problem is, breaking news, the coverage of rapidly evolving or devolving events like these, may bring eyewitness journalism, but breaking news coverage rarely allows for any level of depth or diverse perspective regarding those participating. In other words, you're chasing the story, not immersing in it.

To make coverage even more complicated, these three groups interact on various levels. This graph might help explain it: 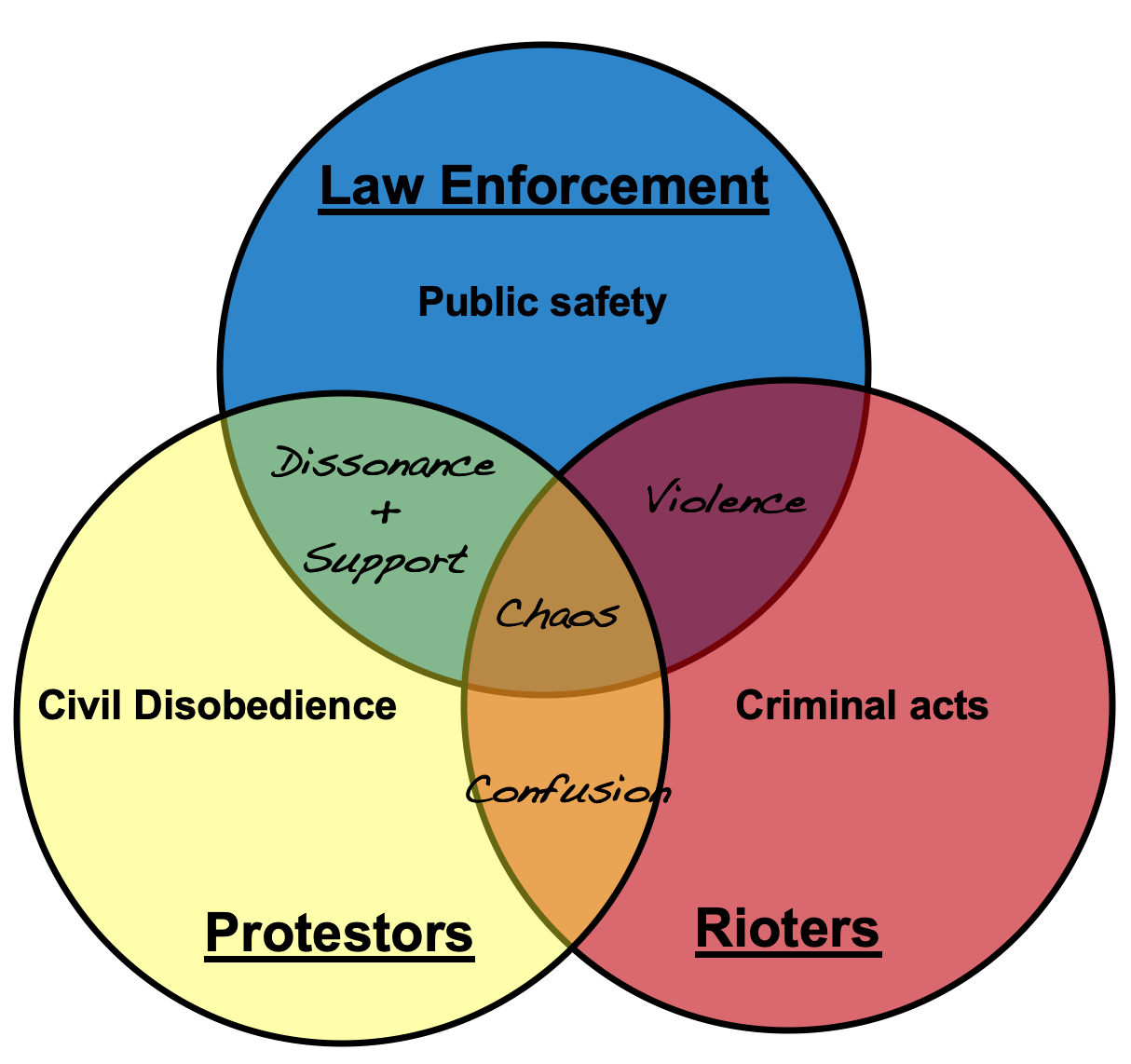 At the very center of the graph, we see the place where most on-scene, breaking news reporting lies — covering chaos. That is not criticism, just a statement of how fluid, wide-ranging and fast these kinds of stories move. One reporter on the street cannot hope to provide more than play-by-play.

Here are those ideas for coverage based on each group. No doubt you can think of more:

There is no higher journalistic obligation than to hold the most powerful government agents accountable for their actions. Society bestowed police with the power to take away freedom, even take a life. Journalists must seriously account for how that power is used.

One report suggested that those who were arrested for violating curfews, even for not wearing a mask (in those communities restricting that) were overwhelmingly people of color. There is also the suggestion that the response of police was different for people of color than for the protests of mostly white conservatives over re-opening the economy. Remember, many of those protestors were actually armed with lethal weapons and protested inside state capitols with those weapons. How did police respond in each of those instances in your community?

This group likely has received the most coverage already. The images of criminals looting, burning down buildings, assaulting others and police are disturbing and of course, riveting. Those images can also easily distract us from covering the peaceful protests by otherwise unheard voices asking for social equality.

Now is the time to ask, who are the criminals — the rioters? Police made many arrests for looting, arson and more, a simple search of arrest records might tell us if antifa, white supremacists, foreign agitators, outsiders or others were involved. What prior records, if any, do the arrested have? Where are they from?

How did they organize? What tactics did they use? You can use your video and maybe drone footage if you have it to see how criminal rioters worked.

And remember, looters and arsonists are criminals or criminal suspects, not protestors. Avoid suggesting they are the same people.

This is where the meat of story lies. These protestors are likely the most diverse group of people (age, ethnicity, gender, class) ever to gather together demanding justice and equality for all.

Who are they? How can you dig deeper into their motivations? What moved people to put themselves in danger? How far did they go (literally and figuratively) to make their voices heard?  What individual stories of heroism (we’ve already heard some) can be told?

Keep in mind, these protests were not just about the death of one or two individuals. Those deaths certainly acted as a catalyst for this uprising, but to suggest singularity would be to ignore the pain by ignoring the past. These protests brought a voice to those unheard for over 100 years — from century-old Jim Crow, lynching, poll taxes, separate and unequal facilities, to modern failing schools, failing infrastructure, ignored pleas for equality and justice for decades and now the deaths of people at the hands of those sworn to keep them safe.

You can provide the contextual, inclusive journalism that brings much-needed perspective and understanding to your community, and maybe you can make your community better because of it. Stay safe journalists, keep fighting this good fight.

Kevin Benz is a 35-year broadcast news veteran and now a newsroom journalism coach. He is former RTDNA chairman. You can learn more at KevinBenz.News.

Covering Coronavirus: How Coverage and Audience Needs are ChangingJune 23, 2020 Local TV News May Never Be the SameMarch 31, 2020