COVID Recovery is Slow for the Broadcast News Industry 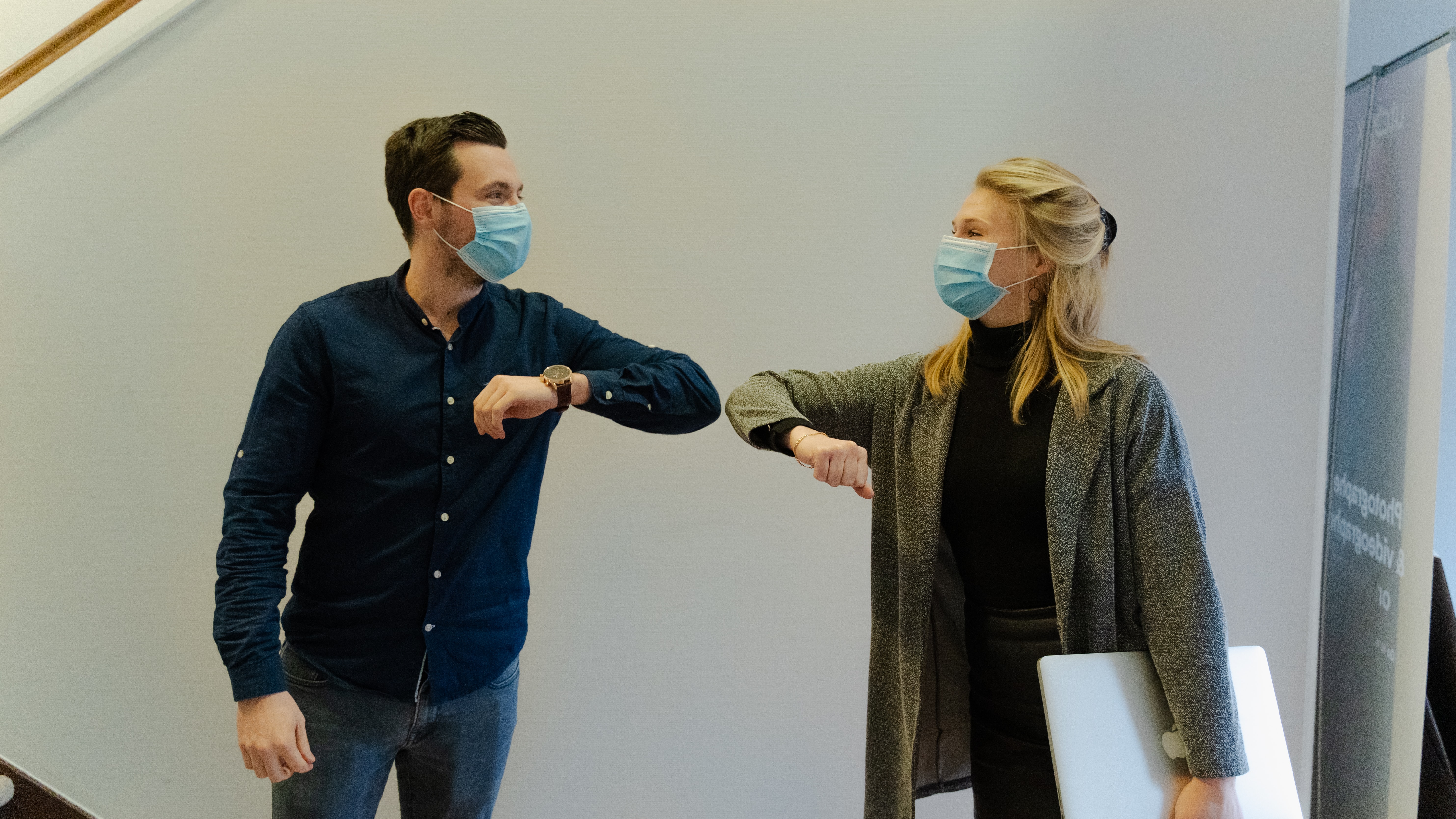 More than two-thirds of TV news directors say their newsrooms are still experiencing significant impacts of COVID, whether in permanent changes to their newsroom, budget cuts, staff size or remote work. 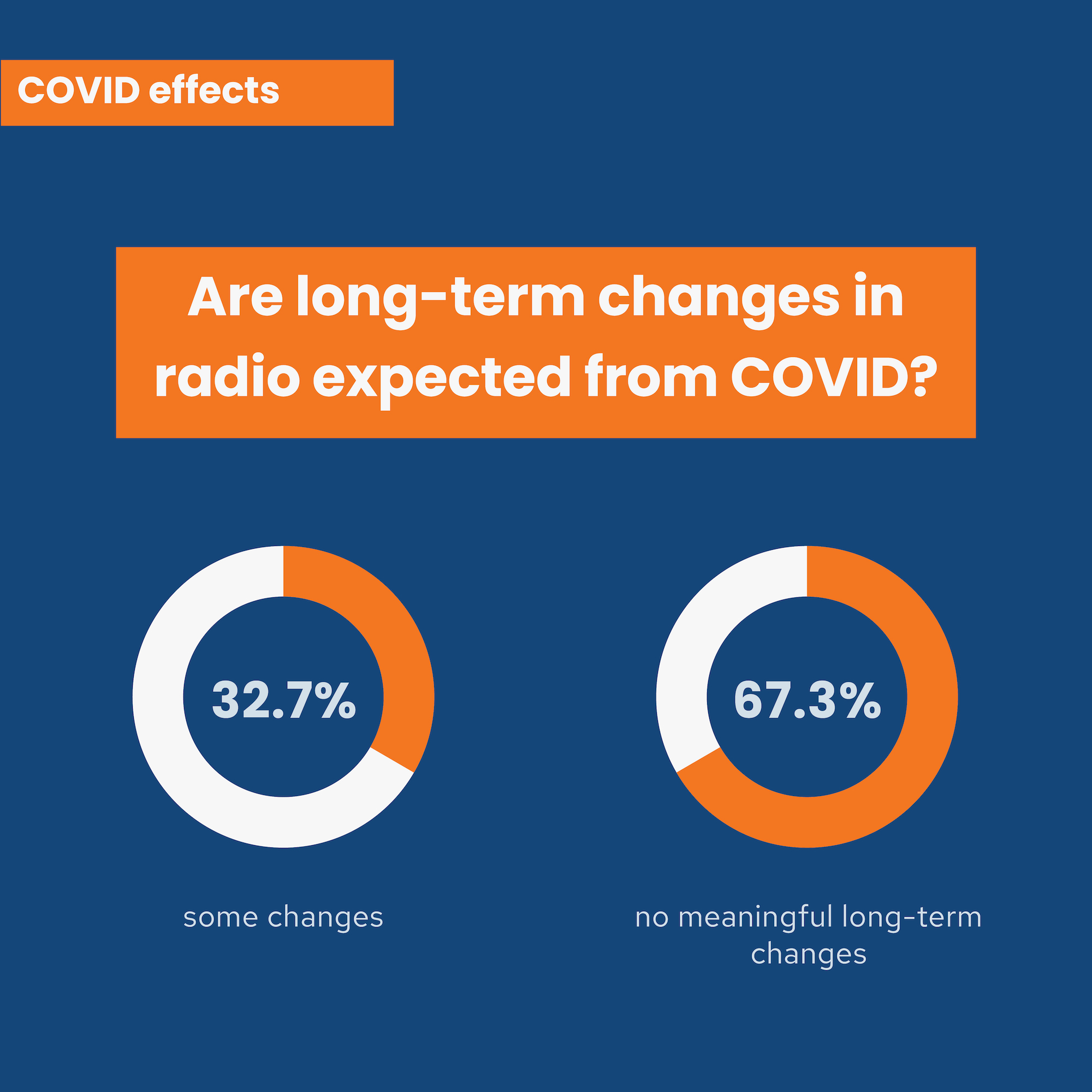 Just 30% of TV news directors say that coronavirus is not having a major impact on their newsrooms anymore. Still, what a difference a year (or so) makes; that’s up from 6.2% a year ago. More than a third of TV newsrooms have seen permanent physical changes to deal with COVID, and nearly a third still have at least some staff working mostly remotely. Almost 19% have had (or have) budget cutbacks, and nearly 18% have fewer newsroom staffers — down from more than 27% a year ago. 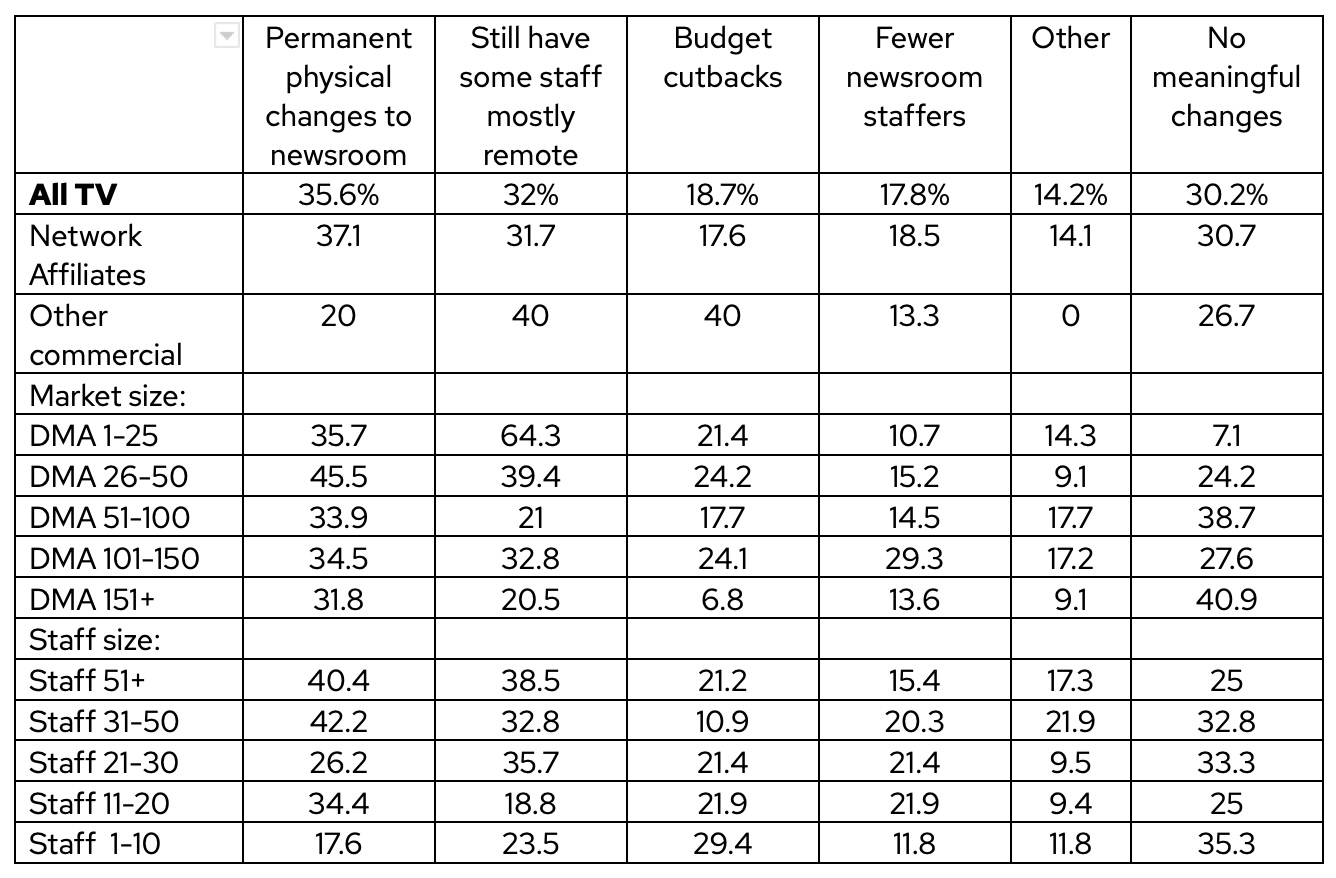 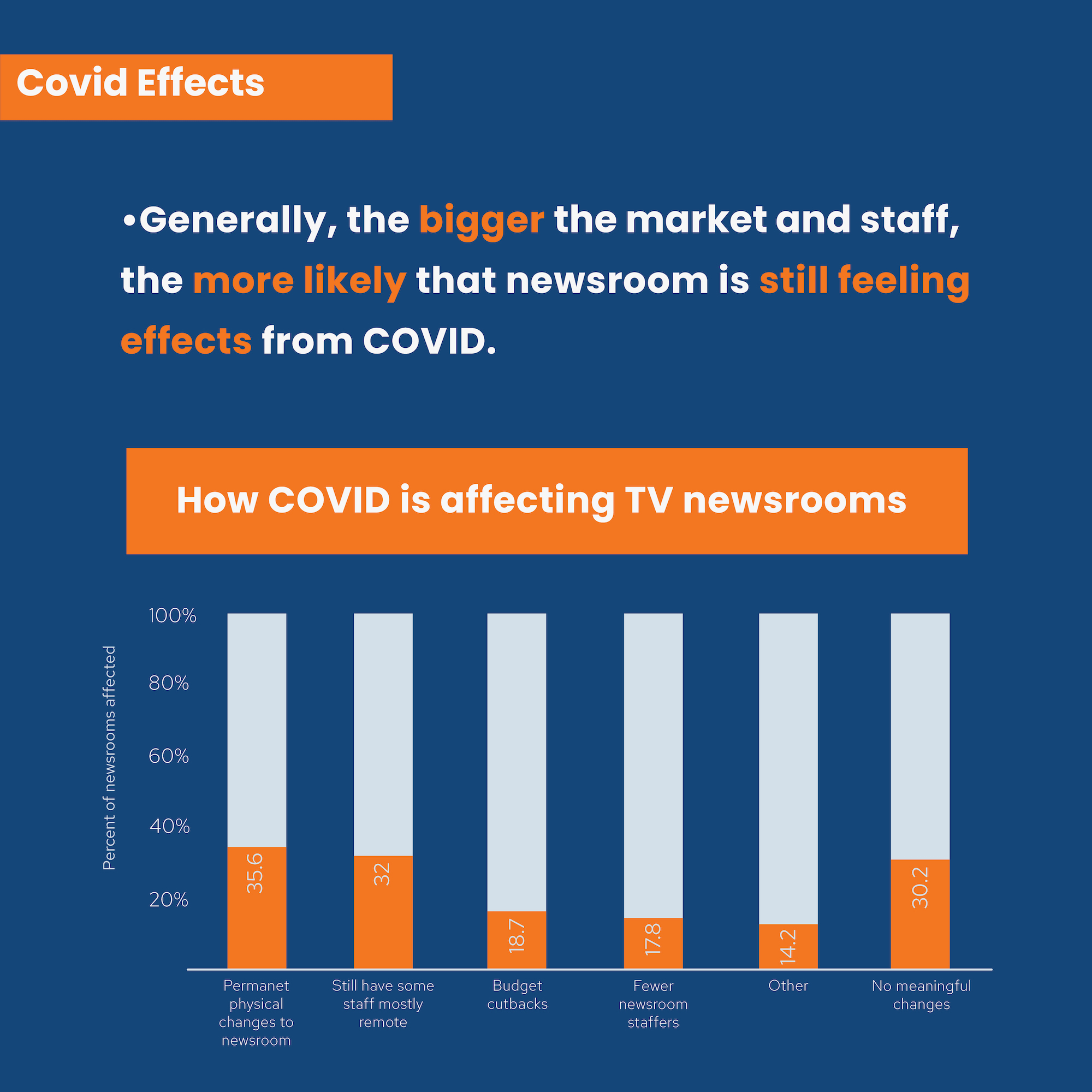 Generally, the bigger the market and the bigger the staff, the more likely that the newsroom is still feeling the effects of COVID. It’s not a completely straight line, but note that just 7.1% of newsrooms in top 25 markets say they’ve made no meaningful changes while 40.9% of stations in markets 151+ say the same thing. There were no meaningful differences by network affiliation, but there were big differences by region. Stations in the Midwest and the South were more than twice as likely to say they’ve seen no meaningful changes.

“Other” is a surprisingly large category, but the answers to “other” are pretty familiar. A third said news people are still wearing masks. A quarter mentioned remote working or hybrid scheduling. Fourteen percent noted virtual meetings instead of in person, and 10% noted “the great resignation” or the difficulties of hiring people.

A majority of TV news directors (55.7%) said they expect long-term changes in how they operate because of the coronavirus. The bigger the market and the bigger the staff, generally the more likely there is an expectation of long-term changes. Network affiliation made no difference, and, interestingly, neither did geography. 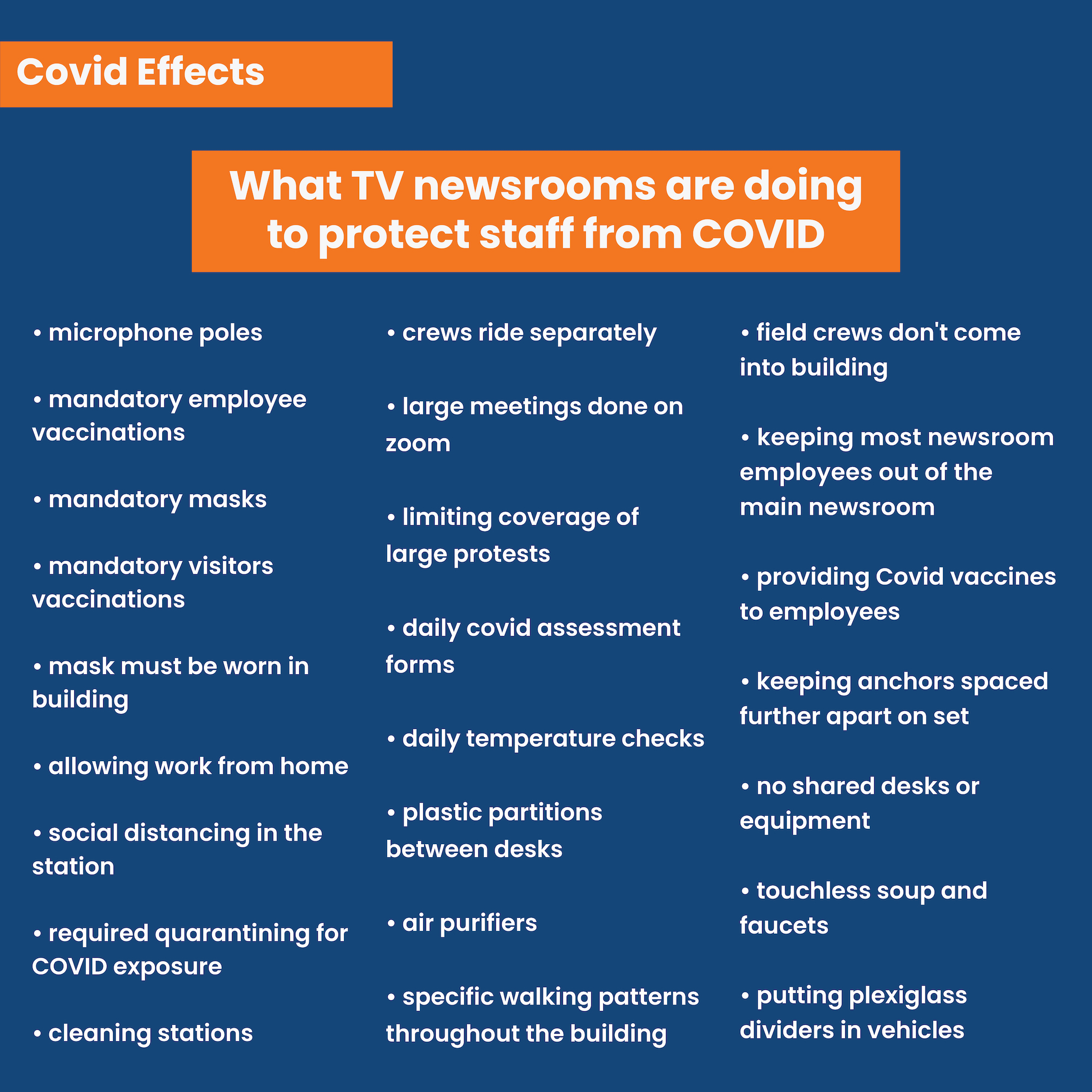 Overwhelmingly, TV newsrooms have changed procedures in order to protect staff from COVID. Overall, 92.9% say they’ve made changes. All market sizes are above 90% except the smallest (151+). The bigger the staff, the more likely that the newsroom has made changes. In fact, every newsroom with 51+ staffers has made changes.

At the top of the list, nearly half the newsrooms (46.2%) have mandated social distancing. That includes remote working, virtual meetings, crews riding separately, social distancing in the station, setting up physical barriers or plexiglass, and not allowing visitors to the station.

More than a quarter (26.6%) have mandated masks in the station. 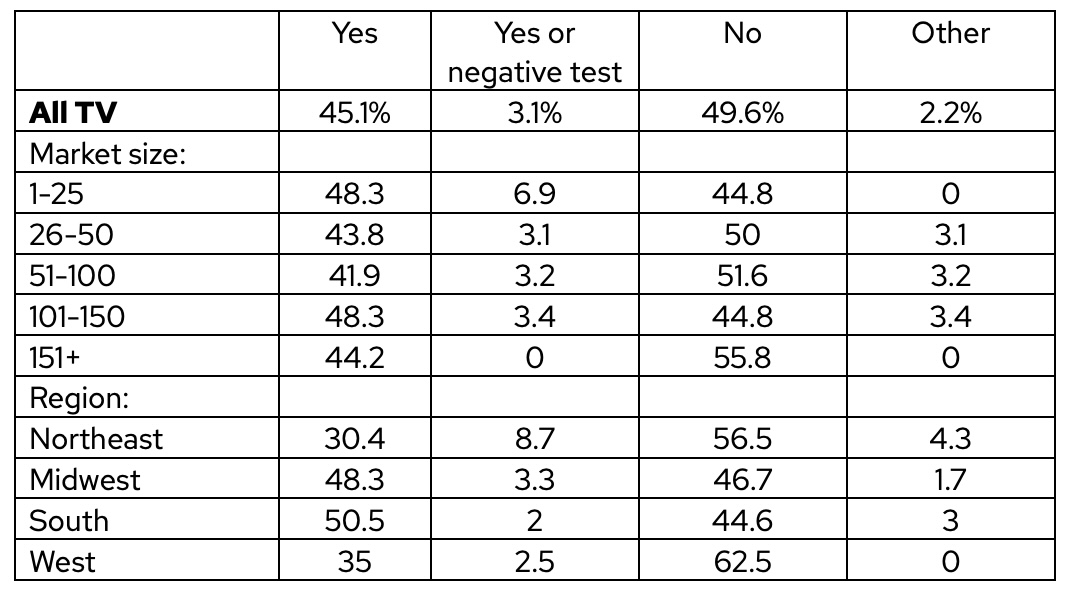 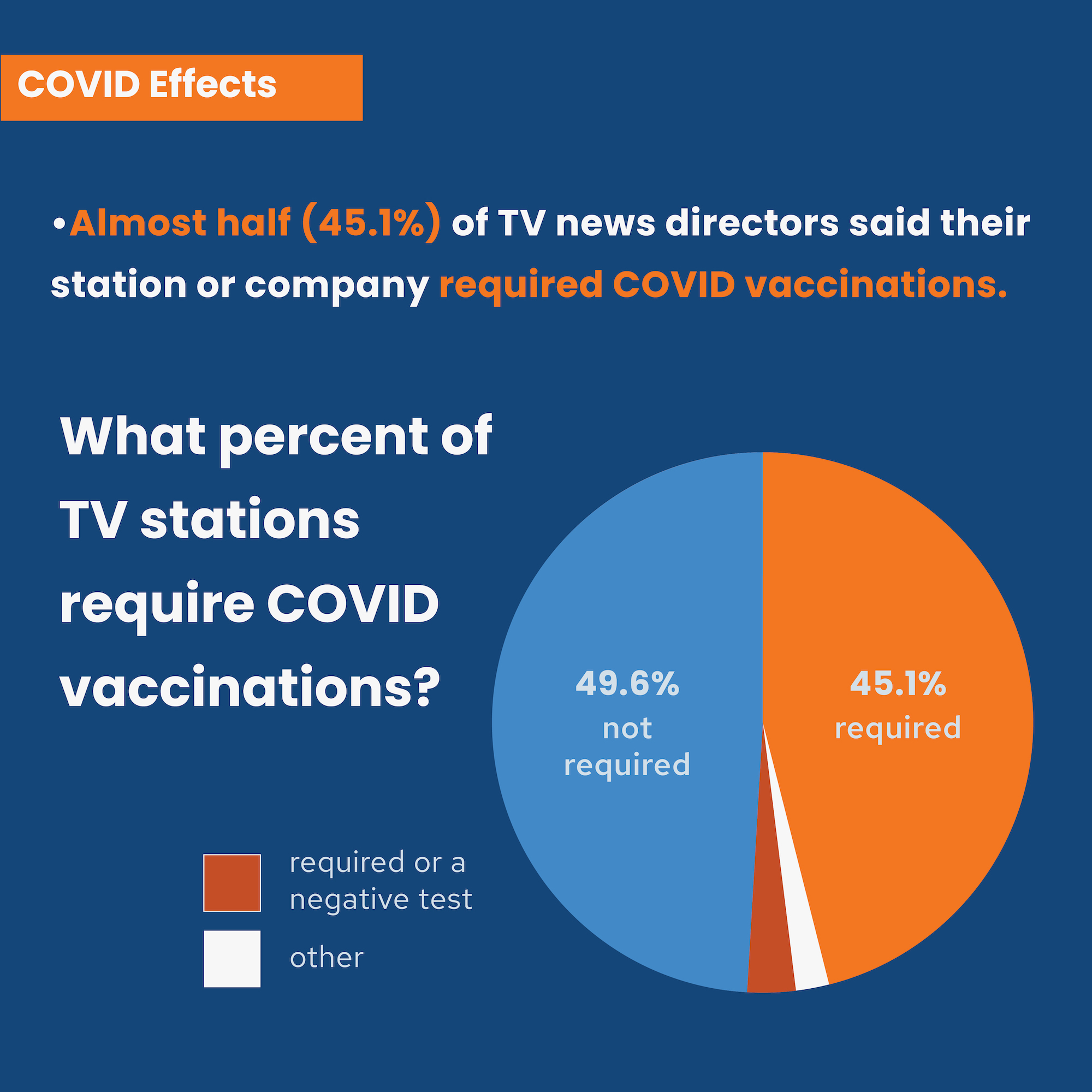 “Other” was a mixture of highly recommend vaccinations, vaccinations required of new employees only and “not required but everyone is vaccinated.”

The latest RTDNA/Newhouse School at Syracuse University Survey found that, overall, 8.2% of radio stations reported that the coronavirus and the economic disruption it caused led to canceling local news. That’s just a hair higher than the 8% reported a year ago.

The carnage hit across all kinds and sizes of radio stations … in all market sizes, in all regions.

These are all changes from a year ago, but the biggest difference is how hard the virus hit non-commercial stations.

Has the coronavirus/economic disruption led to canceling local news? 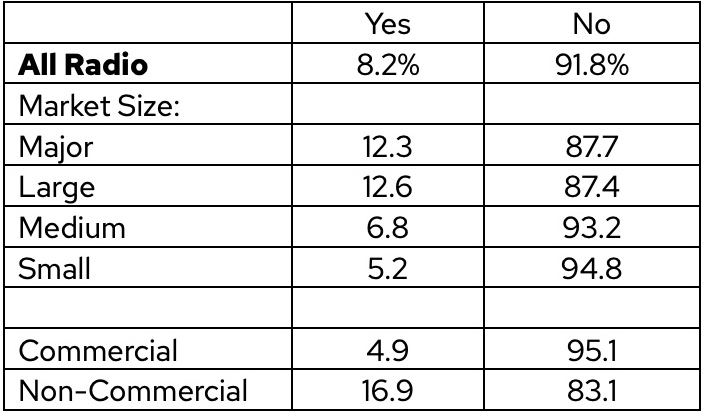 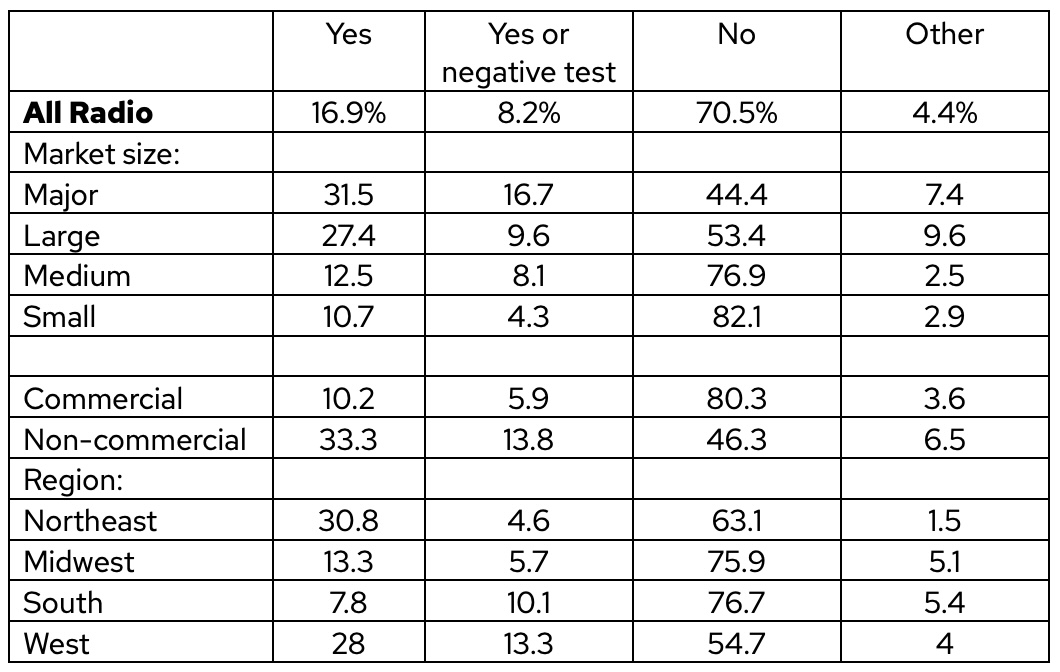 Just over 70% of radio news directors and general managers reported that they have changed procedures in order to protect employees from COVID. The bigger the market, non-commercial stations and stations in the West and Northeast were most likely to have done something to protect employees.

Station procedures to protect against COVID:

How is the coronavirus affecting your radio newsroom today?

More than half (57.7%) of radio news directors and general managers say that things are “pretty much back to normal” at their stations. That’s a 16-point increase from a year ago. Note that the response ties in directly to market size and commercial versus non-commercial.

Two-thirds of radio news directors and general managers expect to see no meaningful long-term changes. Again, the numbers broke down based on market size and commercial versus non-commercial.

What long-term changes do you expect because of COVID?

Beyond the current effects, we asked about long-term changes that news directors and general managers expected because of COVID. At the top of the list, at 61%, came remote work, including working from home, hybrid schedules, virtual meetings instead of in-person and remote interviewing.

Next, at 27%, again came the extension of current practices: cleaning, social distancing and the use of masks.

What to Do When the News is AwfulMay 25, 2022 Introducing Leaders of Tomorrow: RTDNA’s Young Professional RetreatMay 5, 2022