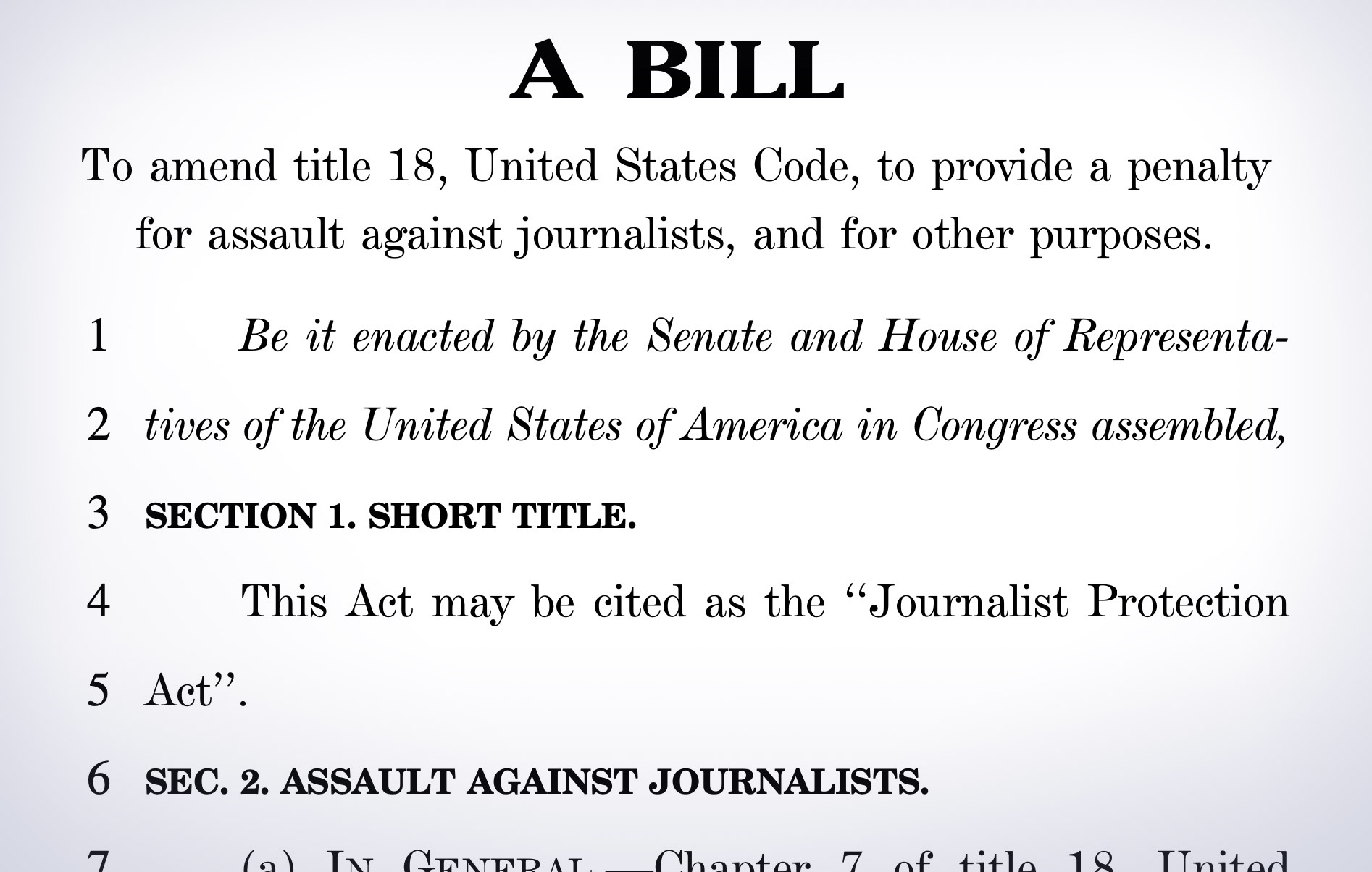 This legislation comes at a pivotal point for the future of the Fourth Estate. The journalist’s job of seeking and reporting the truth has become dangerous. Today even the most routine stories are met with increased risk. Journalists across the country have reported physical and verbal assault, targeted equipment damage and being shot at while on the job.

Newsrooms have learned to adapt to these changing circumstances. In 2020, 86% of news directors changed newsroom procedures to protect employees. They purchased bullet-proof vests and gas masks and began sending out security teams with reporters. Newsrooms took action to protect their employees while government officials across the country stood idly by, intensifying the issue with their inaction.

The Journalist Protection Act would make it a federal crime to intentionally intimidate or cause bodily harm to a journalist or media organization in the course of newsgathering or reporting. It would bring justice to the journalists and media employees who experienced targeted anti-journalist violence by allowing the Justice Department to prosecute those who intimidate or assault journalists when local prosecutors decline to do so.

The JPA is a necessary piece of legislation that acknowledges the dangers of the moment, and acts to create a safer future for the media industry.

“As threats and violence against the media have multiplied more menacingly in recent years, the press needs and deserves greater protection,” said Sen. Blumenthal. “The right and responsibility of journalists to hold accountable people in positions of power is absolutely fundamental to our democracy. I’m proud to work with Congressman Swalwell on this bill that will make it easier and safer reporters to do their jobs without interference.”

“The increasing threats and acts of violence against journalists are deeply alarming, and they need greater protection in order to do their jobs safely,” said Sen. Menendez. “Our democracy and the American people rely on a free and independent press—a strong Fourth Estate—to keep the public informed and hold those in power accountable. Journalists perform a noble public service that the Framers understood was essential to a well-functioning democracy. We need to do more to ensure they can do their jobs effectively without fear of being hurt.”

For months, our team at RTDNA has advocated for the introduction of the JPA. We have gathered signatures from hundreds of journalists expressing their ardent support for its protections. We have collected stories from individuals in the industry who have experienced violence firsthand. We have watched as an institution so essential to our democracy has been repeatedly threatened by those in power.

Tomorrow we begin working to ensure its passage through Congress.

Join us by contacting your representatives and voicing your support for the Journalist Protection Act.

How Journalism Students Can Generate New Ideas to Grow the AudienceAugust 2, 2021 Helping Our Community with Media Literacy SkillsJuly 27, 2021