The Case for Video Innovation and Animation 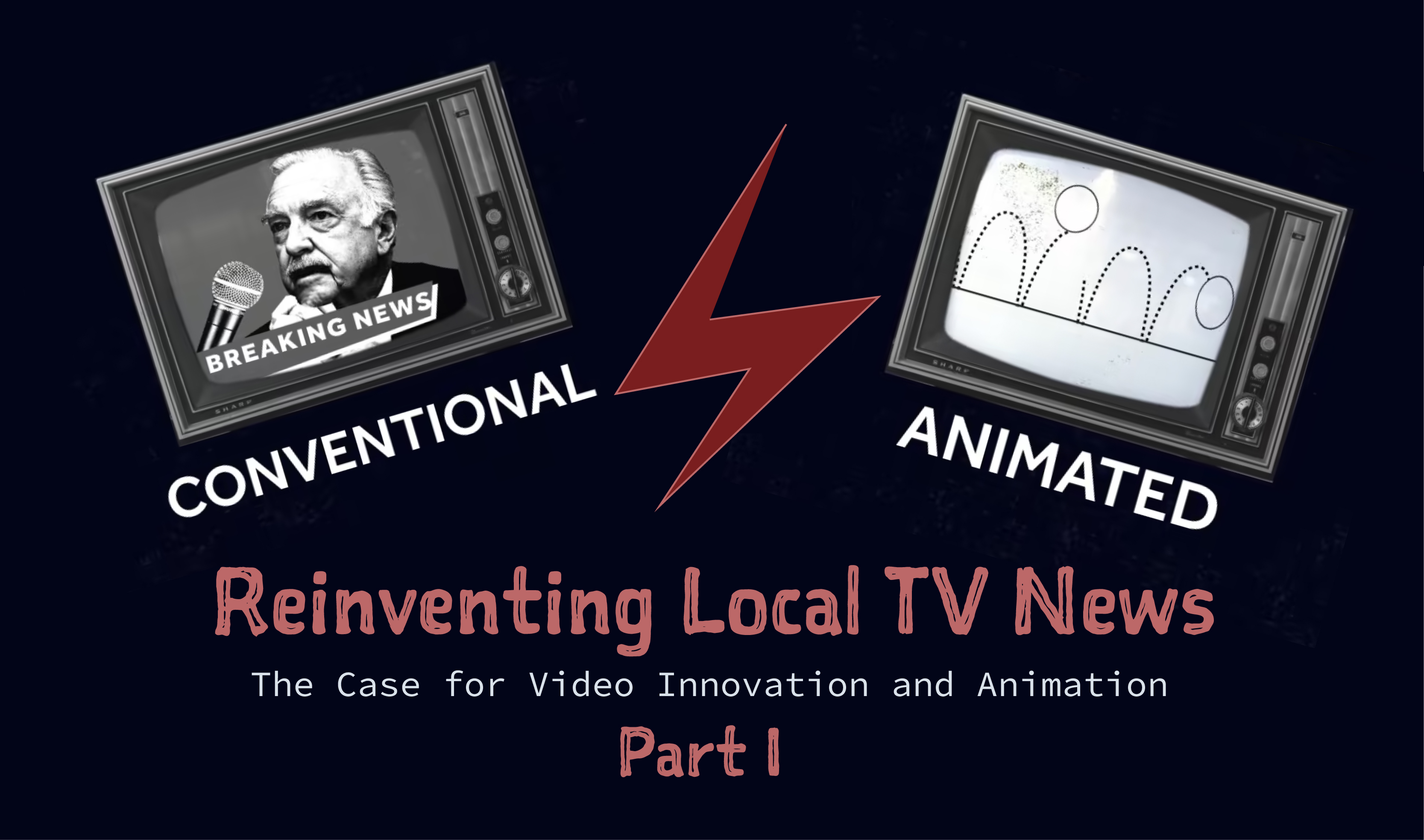 To kick off the RLTVN project’s second phase, we created two new roles at our partner test stations, WLS-TV in Chicago and WCVB-TV in Boston. Two recent graduates with backgrounds in animation, Adriana Aguilar and Bob Curran, took on the role of Visual Content Producer (VCP) at each station, partnering with newsroom producers, reporters, photographers, and editors to apply innovative storytelling techniques in real-time.

Adriana and Bob worked on all kinds of stories in the newsroom, from local interest pieces to national investigative reports. Each VCP’s supplementary content sought to make segments stand out and shine in the cluttered information diet of a typical news consumer. This was done by adding data visualization such as graphs, charts, and maps; animated sequences to explain special processes or how the timeline of a story unfolded; or simply highlighting priority information with emphasis text and icons.

Below are examples of the kinds of the work the VCPs produced:

“Adriana brought a dynamic to the newsroom, a new way of thinking, a fresh perspective that everyone embraced,” says Jennifer Graves, Vice President and News Director at WLS-TV ABC7 Chicago. “It was terrific to see some of our longtime storytellers as they mapped out their stories, say, ‘I wonder what Adriana could do with this information?’”

The graphic sequences the VCPs created proved to add significant value to local television broadcasts, garnering a higher engagement rate overall. We were excited to learn that animation improved audience responses to, and retention of, all kinds of story topics––from political processes to public health.

“In a business where sometimes hundredths of a point or tens of a point can make the difference, I'm always looking for points of distinction and tiebreakers,” says Bill Fine, the recently retired General Manager at  WCVB-TV Boston. “This is absolutely a point of distinction if nobody else is doing it. And it's definitely a tie breaker too.”

All of this work “in the wild” set us up for another key part of the project: controlled testing of these videos with large samples of viewers.

We again partnered with trusted industry research firm SmithGeiger, and this time fielded online experiments with more than 1,000 viewers, from the Chicago and Boston markets, where our station partners are located. We tested a variety of videos that had actually run in the markets against a version of the videos that had been stripped of their enhanced features. In other words, we tested animation- and graphics-enhanced videos against conventional versions, randomizing which versions were seen first.

In subsequent posts for RTDNA, we will unpack more details of our findings, but here are some topline results.

We first wanted to understand how news tastes and needs are changing at a general level. In the survey portion of the experiment, we asked various questions of a sample of 500 persons in each market, cohorts that roughly conformed to the demographics of each city along the lines of gender, age, race, and more.

When making decisions about when, where, and for how long they will tune into the news, viewers in Chicago and Boston said they value coverage that: (a) captures the facts, (b) is unbiased and transparent, and (c) is easy to understand. More than two-thirds of respondents said that providing thorough and comprehensive news coverage, as well as making the news clear and easy to understand, were among the top reasons driving their decision to tune into local news.

Of course, all of these top “news drivers” are theoretically reinforced by the use of animation and graphics. But does animation really work?

It does. And we were pleased to see the data prove the case.

As mentioned, we A/B-tested animated and conventional videos. Below is an example of each, on the same story:

After viewing the local news stories that took a fresh approach to animation and graphics, viewers preferred that style across the board, with audiences more likely to rate the animated stories as clear, compelling, and memorable. The graphically-enhanced stories were generally perceived both as more relevant in content and resonant in tone. Animation also captured positive descriptions in the open-ended questions we posed. Viewers expressed that animation “makes it easier to understand the story,” “makes [the story] very interesting and entertaining to watch,” and “helps to reinforce important points in a story.”

In addition to the story-specific findings, consumers in our survey substantially shifted their views on local news overall. Specifically, we noted an increase in: (a) the value placed on the graphic element of a story; and (b) impressions about the ability of animation and graphics to better convey a timeline of events.

Several key themes emerged that might be valuable to stations’ strategies in the future:

“The research indicated to me that on many, many different levels that you would be interested in knowing, this was helpful,” says Fine, formerly of WCVB-TV. “It's a visual medium––why would we not want to invest more time in making it more visual?”

“I think (animation) is a very powerful tool,” says WLS-TV’s Graves. “Anything that you can do to make your product stand out in the crowd and differentiate your product, I think is worth looking at.”

In our next post here at RTDNA, we unpack in more detail the experience of our partnerships with WLS-TV and WCVB-TV. There is a lot to say about these “in the wild” experiments––and a lot of lessons to share that might be useful to the 700-plus other local TV news stations across the country.

We will wrap up the series, too, with more data from the project overall, and a final post laying out action steps for stations interested in advancing this approach to video storytelling and further engaging their audiences.

If you’re interested in the project, please don’t hesitate to reach out to us. We would be happy to advise, chat about our experiences, or hear about yours. Contact project lead Mike Beaudet at m.beaudet@northeastern.edu.