The Case for Changing the Way You Tell Stories 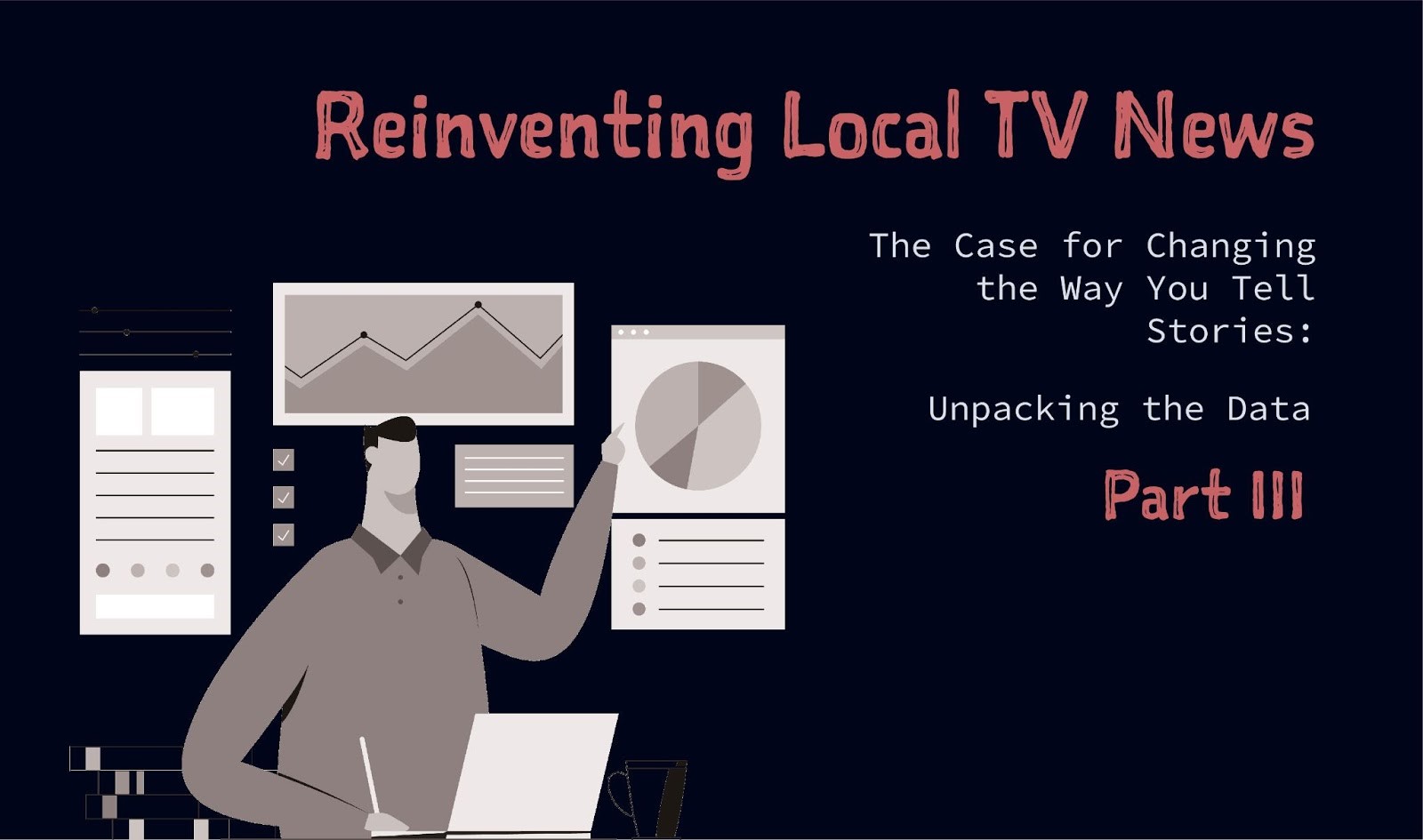 So much local news coverage is tied to the news cycle at a time when audiences are also expecting insights, context, impact, and an understanding of stories as they unfold.

This means that the 700+ local TV news stations across the country are increasingly missing opportunities. But it’s not too late.

In our research series here at RTDNA (see Part I and Part II), we’ve been building the case that new forms of storytelling, particularly next-generation animation, are vital to meet new audience expectations and norms. In this post, as well as the accompanying slide deck, we hope to provide an in-depth look at the data we gathered and the topline takeaways for how graphics and animation can enhance local TV news storytelling. We hope you’ll dive in and see there’s a powerful case for breaking the mold.

What are the general takeaways to consider as you consume this information? As we examine the data, we hope you’ll remember two themes in particular:

We present these insights based not only on partnerships we facilitated with TV stations, but also on a rigorous experimental survey, conducted with more than 1,000 respondents across the Chicago and Boston markets.

In the research, we partnered with analytics firm SmithGeiger and showed more than 1,000 TV viewers four news stories, all drawn from their specific market and produced with the help of the Visual Content Producers we embedded in newsrooms at WLS-TV ABC7 Chicago and WCVB-TV NewsCenter 5 Boston. For the experimental survey, some of the videos were left “as is,” with the animated segments in them; we also created alternate versions with the animation stripped out, converting back to the  traditional or “conventional” format.

Half of the videos each respondent saw were animated, and half conventional; the final video appeared in a social media frame. For the first two video exposures, the same news story was seen twice: half saw the animated version first, half saw the conventional version first. This process was randomized to control for effects like novelty or fatigue.

The demographics of our sample: It was 56% female, 44% male; it was 74% white, 12% Black, 9% Latino, 8% Asian; about one-third were ages 18-34, while 30% were 35-44 and 40% were 45-54. These proportions were designed to mirror the general makeup of the news market in each region. We present our entire summarized slide deck of data here for your review. Please feel free to get in touch if you’d like us to walk you through it. As you review the data, consider these three thematic insights.

The findings below have implications not only for stations trying to target or improve products with regard to certain demographics, but also for station strategists thinking about volatility and affinity––how to make sure loyal viewers stick around while also pulling in the “surfer” crowd, which flips channels for the most interesting coverage.

Respondents in our survey indicated that they preferred the animated versions of the stories they were shown to the conventional ones by a 24% margin. They gave the animated stories a thumbs up upon initial impression and categorized them as more “interesting to watch.” The animated video versions also beat out the conventional in specific descriptive categories such as “well crafted,” “visually interesting,” “innovative,” and “direct and to the point.” 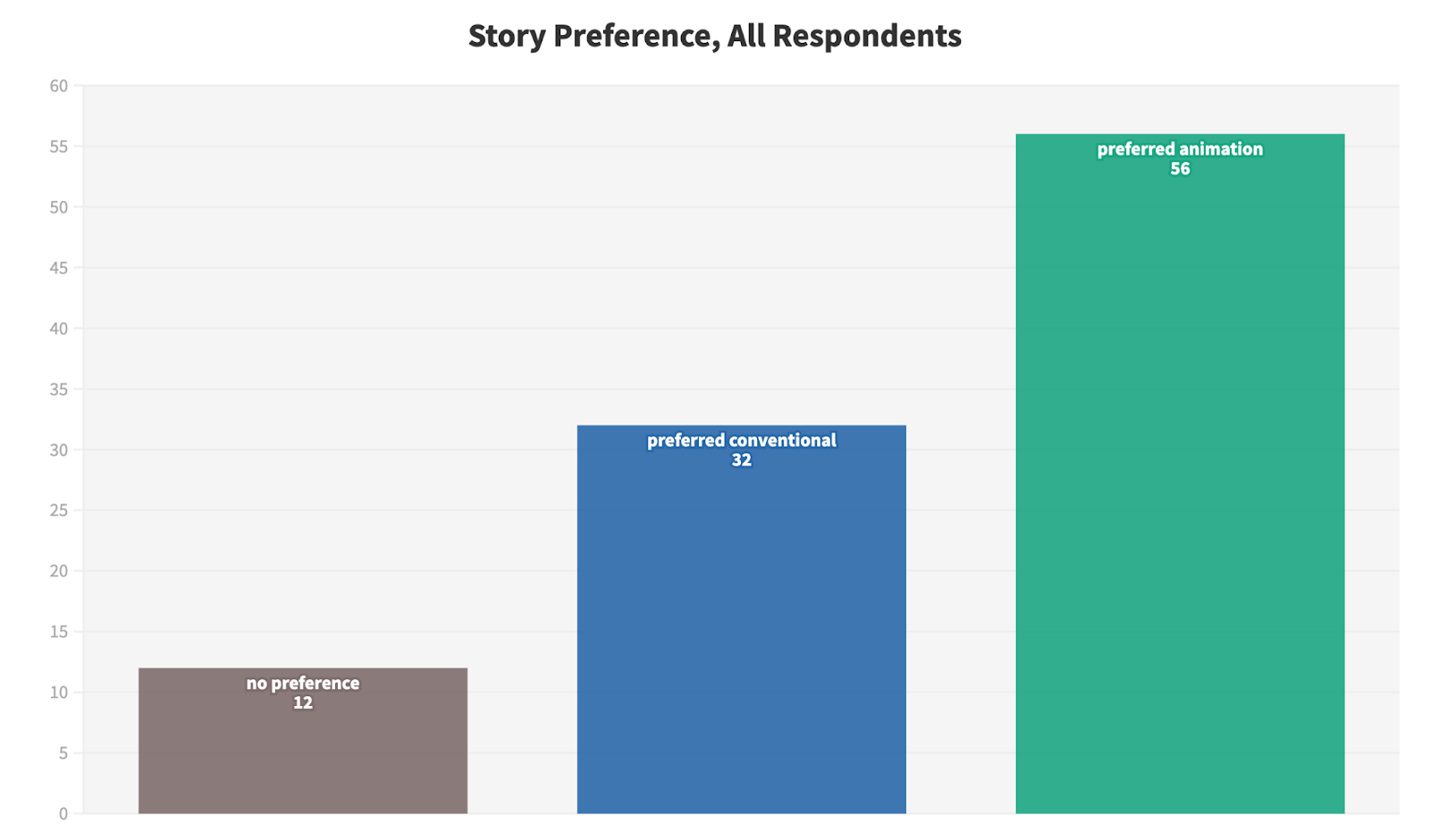 In particular, viewers appreciated the clarity, relevance, and more resonant tone that graphics and animation delivered. Common themes that appeared in our open-ended responses included that animation made the video easy to understand, broke up the story, and showed more impactful and compelling detail with tools such as maps and graphs. 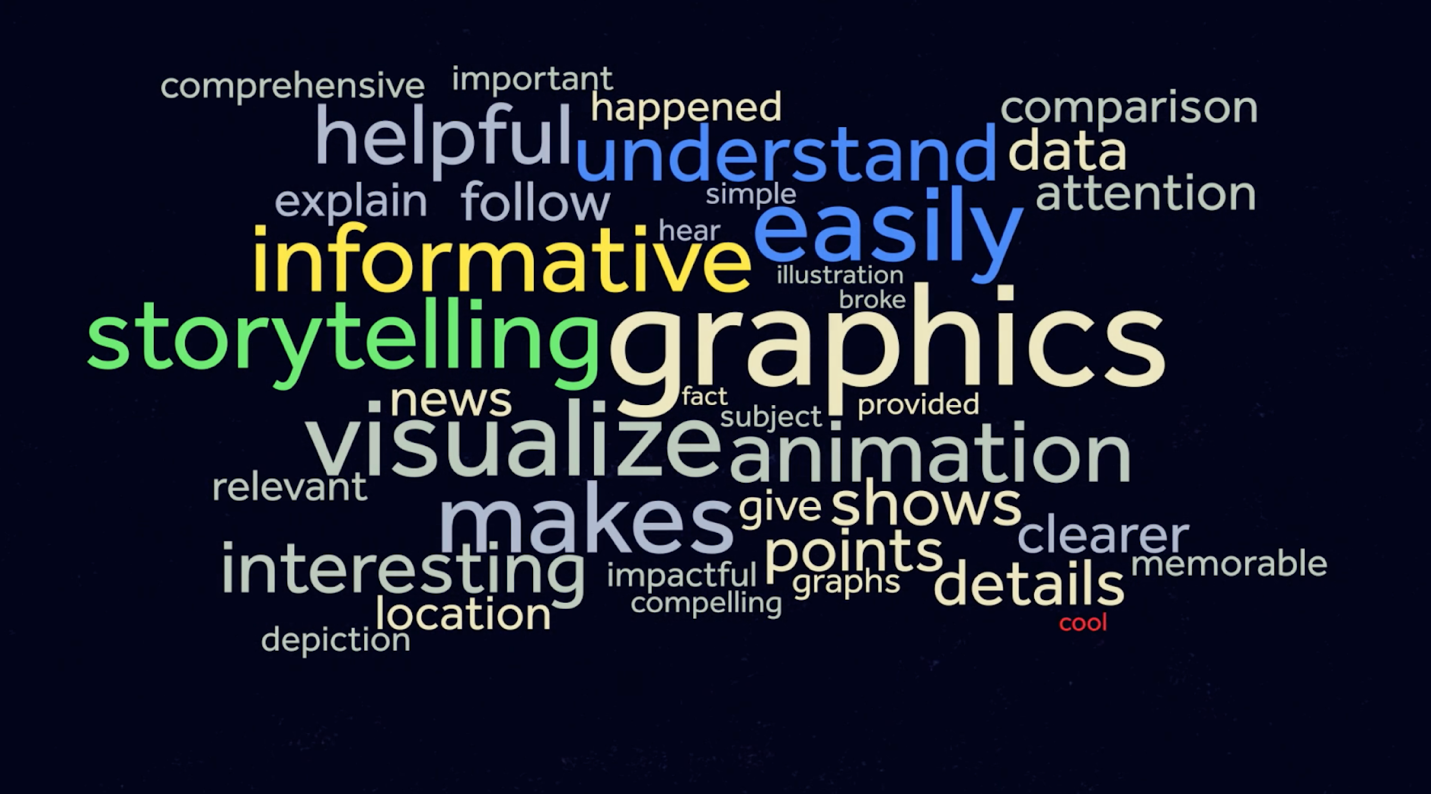 Subset of keywords used in open-ended responses, asking why the animated version was preferred

Before members of our survey saw the example videos, “having an innovative look and feel” and “using compelling graphics to illustrate a story” were identified as relative vulnerabilities for local news, with respondents––especially younger women––ranking these as some of the elements that local TV is least effective in delivering.

After we showed participants the videos, the potential of graphics and animation in local news became even more apparent. We saw a significant increase in the proportion of people who said that they liked to see graphics and animation included in news stories, and would be more inclined to watch a particular program, a station, or local news programs more generally if they improved the quality or quantity of graphics.  Timelines and maps in particular earned our storytelling a ~10% leap in perceived “helpfulness” of explaining events before and after seeing the animated approaches in our sample.

Animation consistently helped viewers absorb information more efficiently, both by their own estimation and as evidenced by quantitative retention tests. Viewers indicated they felt that the animated stories more often included “the right amount of detailed information” as opposed to overloading them with granular detail or leaving them with more questions than answers. As one viewer put it, the animated version of a story about a super spreader event in Chicago “more clearly showed how many people [were] infected” with the coronavirus. A story about a small plane crashing off the freeway was described as “easy to follow” and “familiar” when maps and text-based graphics showing the location and time of the incident were added. 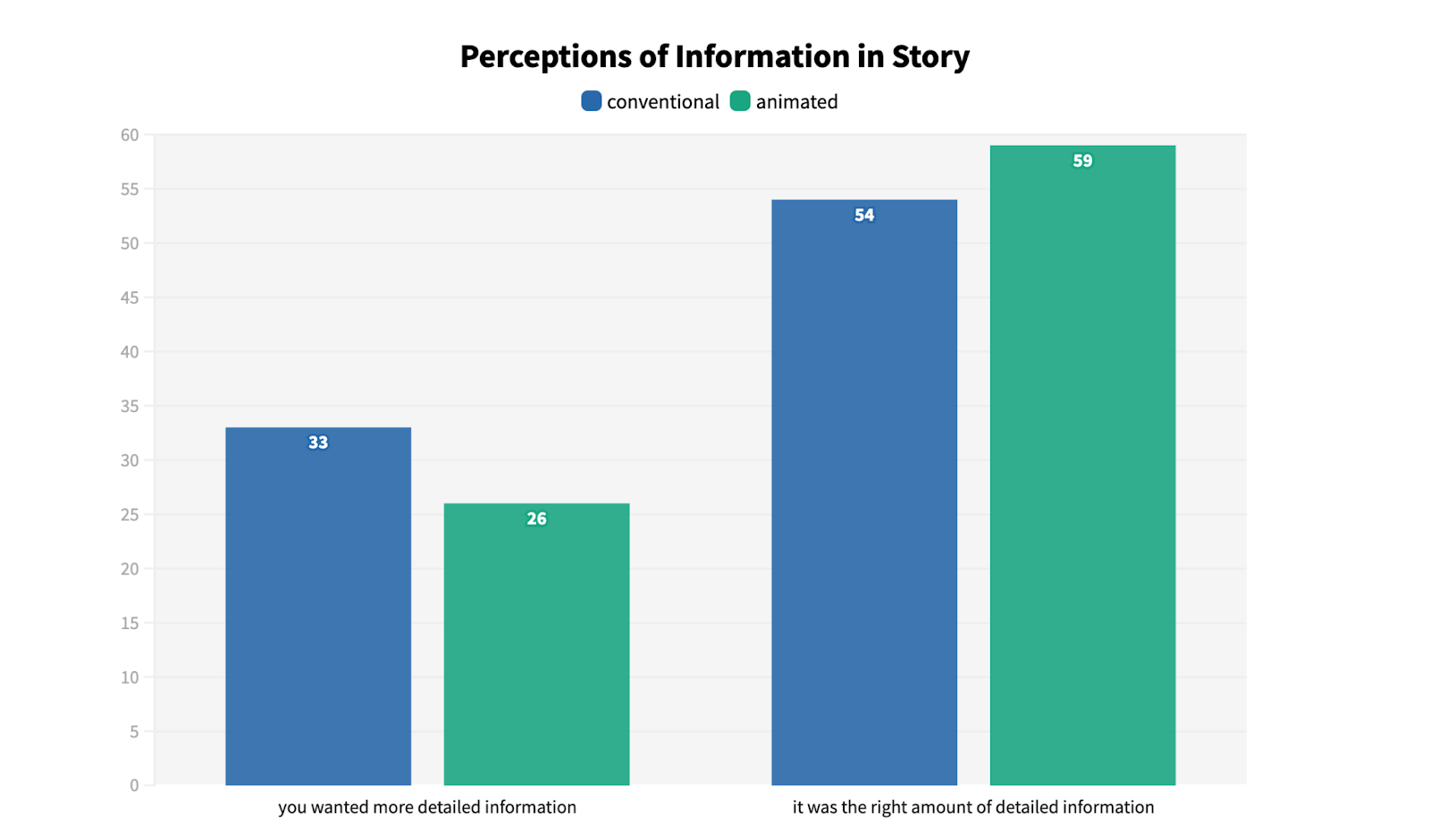 But we didn’t just ask respondents how much information they felt they retained; we actually quizzed them on specific elements of the reporting to see how much they remembered accurately. Animated versions with charts, maps, and animated segments showing a sequence of events increased correct answers by participants to these questions by 2-3% across the board. That may not seem like much, but every step stations can take to amplify the accurate reporting they work so hard to produce is a win in light of dwindling attention spans, the rapid spread of misinformation online, and an increasing rate of exponential and abstract phenomena like global health and climate change affecting public life in very concrete ways.

Charts, timelines and maps are helpful to viewers across demographics

This applied to trust as well, with visual statistics and maps significantly increasing the amount that 45-54-year-olds indicated they would trust the content of a broadcast. We also found that adding visual statistics, timelines, and maps can build the trust of the 35-44 demographic, consistently pushing it over the 60% mark.

For stations looking to expand the racial or gender boundaries of their audience, we found evidence that innovation in storytelling could be a winning strategy. Findings along these lines include:

Further, for new viewers (5 years or fewer in their respective market), seeing our videos increased the perception of the power of graphics to explain a story’s impact on them personally by 10%.

In our final post here at RTDNA, we will provide some concrete recommendations for stations to enhance and expand their storytelling with next-generation animation and graphics in both daily and longer turn investigative pieces.

If you’re interested in the project, please don’t hesitate to reach out to us. We would be happy to advise, chat about our experiences, or hear about yours. You can meet some members of our team in the webinar in Post I. To see some exploratory data visualization, particularly of the top reasons different demographics tune into local TV news, check out our student project here. If you are interested in hosting a workshop in-person or virtually at your station to learn more about hands-on recommendations and even get some motion graphics templates to start your team’s animation journey, please express interest via this form. You can also contact project lead Mike Beaudet at m.beaudet@northeastern.edu.